Since a recent GQ Magazine article outed his homophobic and pro-Jim-crow views, left-wing commentators have declared open season on Phil Robertson, the patriarch of A&E’s “Duck Dynasty.” Robertson, based on his reading of Christian scriptures, considers homosexuality a sin and predicts that homosexuals will be excluded from the Kingdom of God.

In Salon, Joan Walsh pronounced Robertson a “bigoted pseudo-Christian.” Another Salon author, Brittney Cooper, a self-professed “reluctant Evangelical,” took aim at Robertson’s “conservative theology,” denouncing the “violence” that it “does to gay people in the name of God.”

Cooper’s Bible and Robertson’s Bible are the same. However, Cooper’s practice of “hermeneutic [interpretive] consistency” differentiates her from Robertson who likely reads scripture literally (as if a literal reading were possible). Those of us who treasure scripture would do well to emulate a thoughtful and compelling approach like Cooper’s. Hers is a living theology.

Contra Robertson, a living theology, according to Jewish theologian, Michael Fishbane, treats ancient, sacred writings as more than simple and fixed storehouses of information. A living theology, Fishbane writes in Sacred Attunement, includes an intentional, ongoing effort of “adaptation and clarification” of religious texts. This effort helps us remain alert to the traces of transcendence that break through our everyday consciousness and to “sustain (and even revive)” them “in the normal course of life.”

Readers of the Bible who eschew the effort of adapting and clarifying scripture cut themselves off from traces of transcendence. Their theologies are dead.

Also, the unquestioning acceptance touted by such as Robertson is neither coherent nor honest. Though literalist Christians believe that they take scripture at face value, they necessarily, at some level, interpret it.

On some issues the Bible is inconsistent or opaque. Martin Luther, who advocated relying on scripture to decide all issues, discovered that, at times, it is silent on important questionsfor example, child baptism. As a result, each of us, whether we are aware of it or not, constructs meta-Bibles out of passages we select from the actual Bible. We assemble proof-texts that make sense to us or align with our commitments and values. We downplay Biblical proscriptions that inconveniently conflict with our favored moresfor example, the indifference of many contemporary Protestants to Jesus’ prohibition on divorce. Contradictory passages are set aside (Cooper does this with admirable transparency and clarity of purpose) or hyper-interpreted until they harmonize.

Consider in this regard, Robertson’s likely view that God so loved us that he sent his only Son to die for us on the cross. This is an interpretation of the crucifixion to which St. Paul hints in the New Testament but which did not enter the arc of Christian thought as a fully rendered doctrine until Anselm of Canterbury (1033-1109) developed the satisfaction theory of Christ’s atonement.

Proof-texting and interpreting the Bible is unavoidable.

In addition, as Fishbane notes, the books of the Bible were spliced together. Varying worldviews and theological commitments are interwoven, sometimes within a single passage. Thus, scripture itself is an example of the work of interpretation and revision; its internal disagreements invite usnay, prod usto follow its lead and adapt and clarify. By doing so, we keep scripture and our theology alive.

Fishbane helpfully recommends reading events in the Bible as “theological expressions of primordial truth. The narratives of scripture thus become paradigms of perennial matters bearing on divine presence (both transcendence and immanence), as well as the human response to them.” More generally, “the old words of scripture are spaces for ever-new moments of spiritual consciousness and self-transformation.”

Christians like Robertson resist looking for such spaces and maintain their (imagined) literal grip on scripture. Joan Walsh calls Robertson a “bigoted pseudo-Christian” but she’s wrong about the “pseudo-Christian” part. Robertson is a Christian; his beliefs rest on interpretations at odds with those she prefers. There’s no doubt, though, Walsh is right about the “bigoted” part. Let’s be clear: Robertson’s dead theology is downright ugly. 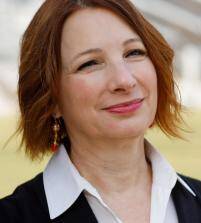 Former editor of Sightings at the University of Chicago Divinity School, Dr. Myriam Renaud has written about religion for The Atlantic, The Conversation, Religion & Politics, The Globe Post, and more. She is co-editor, with William Schweiker, of Multi-Religious Perspectives on a Global Ethic: Toward A Common Morality (Routledge, 2020). She is at work on an academic monograph, Toward a Moral God and a Humanizing Theology, and a general audience monograph, White Evangelicals in America. She earned a doctorate from UCDS in 2018.