God Is My Refuge

God is our refuge and strength,
an ever present help in trouble.
Therefore we will not fear,
though the earth give way
and the mountains fall into the heart of the sea.
though its waters roar and foam
and the mountains quake with their surge.
Selah
— Psalm 46 (NIV)

About 35 years ago, something began to happen. To some it was the beginning of triumph, for others, the ground work for disaster. While it started in the secular community, it soon found its way into the religious. Things were starting to change. God was doing something. God started to call His children back to Him. He started to call His gay and lesbian children home to Him.

How much faith did those whom God first called to start this ministry have? My goodness, they must have had the faith that could move mountains! They went against everything the church taught, they stepped out on God’s promise to begin ministry. They accepted God’s call, even though it looked like something they really shouldn’t have been doing. God supplied them with what they needed, and in faith they took the first steps. They literally jumped off a cliff at God’s leading, and He caught them, and made them and their ministries fly.

Through it all, God had a purpose and a plan. He planned out the lives of those who would begin those ministries, the directions those ministries would take, and the way He would get them through the tough times they would have as they fulfilled His plan to call His gay and lesbian children home.

I’m not broken. I’m shattered. There are many of us today who are not broken, but shattered. It seems as though the past hurts have ganged up on us, and have caused us so much pain that we just can’t seem to pick up the pieces. The recent scandal in the Catholic church about sexual abuse has caused some of us the deepest pain.

It is interesting how God works. Every day we go through the same old stuff. We do the same old things. We never really look at the details much. We might not even see just how He’s working in our lives, then boom! Something snaps, and we begin to look at things differently. We see the places where we have failed, we see where we made the wrong decision, we see where He has led us, and when we followed. We see just how much better things went when we did what He wanted. We see how much strength we actually got from Him as we went through trials.

God is our refuge. As we go through trials, He brings us comfort and peace. As we face difficult situations, He gives us His strength. When we cannot see the way we are to go, He sends us His wisdom. When we are lost, He finds us, and pulls us close to Him to show us just how much He loves us. God is my refuge and strength, a very present help in trouble. No matter what the situation, no matter how good, or how bad, God is there to rejoice with us, and to comfort and care for us. 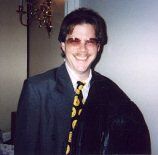 Michigan native Eric Bicknell served in the Salvation Army for 28 years before joining MCC Detroit and later, Praise Fellowship Christian Church. A collector of Christian hymnals and sheet music, he specializes in Salvation Army music and at one time had accumulated more than 250 hymnals.