Whosoever was founded as a print magazine in 1996 to serve as a voice and a resource for lesbian, gay, bisexual and transgender Christians. Back then there was little, if any, support to be found for LGBT Christians — not just on the internet, but also in print. Christian magazines such as Christianity Today and Moody’s regularly took potshots at LGBT people.

Whosoever published four print editions under founding Editor Candace Chellew, who had more than 20 years’ experience in the media, before moving online for good. At its peak Whosoever.org received more than 500,000 site visits a year — and many wrote to say how it had either changed or literally saved their lives.

For 18 years Whosoever’s mission was to stay on the cutting edge of the LGBT movement for acceptance in both church and society. In the meantime Candace earned her Master of Theological Studies from the Candler School of Theology at Emory University in 2002, and in 2003 she was ordained by Gentle Spirit Christian Church of Atlanta. In 2008 she published Bulletproof Faith: A Spiritual Survival Guide for Gay and Lesbian Christians. She is currently the minister of Jubilee! Circle in Columbia, S.C.

In 2019 Rev. Paul M. Turner, Senior Pastor of Gentle Spirit Christian Church, answered the call to serve Whosoever in the role of Editor-in-Chief under the guidance of Candace in the role of Editor Emeritus. Together they’ve broadened Whosoever’s mission to be about reaching all those who seek a deeper understanding of the truly loving God, whose unconditional love is experienced as boundless grace.

Every time I open Whosoever I am amazed at the quality and quantity of work that goes into this magazine for GLBT Christians, their friends and families. I am especially grateful for the information Whosoever provides for that closeted Christian who after being rejected by his or her church and family has nowhere to go but the Internet to find someone who understands. — Soulforce Founder Mel White 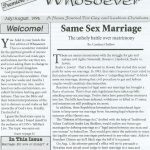 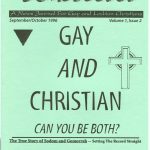 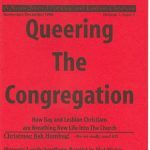 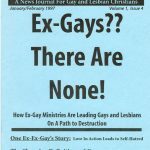 Serving as one of four Co-Pastors for Casa de Cristo Church and Apostolic Center in Phoenix, Ariz., an inner-city ministry tha...

Professor Emeritus of Religious Studies at the University of Kansas where he taught for 33 years and was department chair for six ye...

Whosoever founder and Editor Emeritus Rev. Candace Chellew is the author of Bulletproof Faith: A Spiritual Survival Guide for Gay...

An ordained minister in the United Church of Christ, Rev. Dwight Welch is the campus minister at United Campus Ministry at Montana S...

An adult convert to Christianity who grew up unchurched but has always been a spiritual seeker, Lance was baptized at age 28 i...

A founding member and the current Vicar of Gentle Spirit Christian Church of Atlanta, Alyce Keener felt called from an early age in...

A professor in the School of Electrical and Computer Engineering at Georgia Institute of Technology since 1997, Jennifer Hasler ea...

A lifelong counselor, teacher and educator, having worked in elementary and secondary education for 25 years, Gary Simpson is a me...

A writer and poet who worked for 12 years in the mental health field, Dominica Applegate is the author of the book “Recycle Your P...

The first openly gay priest to be consecrated a bishop in a major Christian denomination, the Right Rev. V. Gene Robinson served as...

Herndon L. Davis is author of the book Black, Gay & Christian: An Inspirational Guidebook to Daily Living, published in 2004.

Activist and author Tuan N'Gai made waves with his 2001 book Will I Go To Heaven? The Black Gay Spiritual Dilemma and followed i...

Florida native Shurron Mitchell Farmer is a mathematics professor in Washington, D.C. He earned his bachelors in mathematics ...