A Sense of Spirituality

I spent the first weekend in August at an inspiring conference – Together in Faith – hosted by the American Friends Service Committee. From the opening reception – put on by the First United Methodist Church of Ypsilanti – through the closing plenary my dreams, chants, and prayers for a progressive spiritual challenge to the fundamentalist political movement were answered. The Faith Action Network is a project of the Michigan office of the American Friends Service Committee. Their goal was to bring together people of faith that are lesbian, gay, bisexual, as well as the transgender umbrella, and our allies. With the help of the Eastern Michigan University they were successful.

The uniqueness of this conference was not in it being spiritual in nature. What was unique for a LGBT conference was the call for progressive, spiritual thinking people to unite in activism. I personally have been deeply emotionally drained by the results of the last two presidential elections. The far right Fundamentalist Christian movement seems to have a lock on our country, and is holding the constitution hostage with the weapon of biblical theology. This approach of taking over government offices has run the gambit to state, county and city elected offices.

Florida on the whole is a perfect example of how Fundamentalist Christians on all levels have used the election process to gain power. With the key issue being blame every thing on “the gay agenda” they have taken control of state, county, and city offices. In Hillsborough County they have banned all Gay Pride displays from public libraries, and cut of all funding for Planned Parenthood. In my home city of Largo, the term “sexual orientation” was removed from a paragraph in the city employees handbook dealing with diversity. The city commission found the term offensive. To top that off, the city commission then appointed a group of seven white males, all over 50-years-old, all Fundamentalist Christians to rewrite the city charter.

Back to the Together in Faith Conference: I do not what to list the churches that where represented at the conference for fear of forgetting one of them. I will say this was a delightful gathering that was the most multigenerational, multi-religions, and multiracial gathering that I have ever attended. As so many churches’ general assembles are becoming a battleground over the civil rights of LGBT church members this gathering was a breath of fresh air. The political ramification of this conference was the strong point on activism of all progressive spiritual movements and the call for unity, from Rev. Berry Lynn of “Americans United for the separation of Church and State” to Rabbi Michael Lerner’s, Call for “Spiritual Activism.” (Lerner is editor of Tikkun Magazine. Pronounced “Te-kun” it means: To mend, repair and transform the world.)

We as an organized progressive spiritual movement can change the far right’s hold on America, and the world. Changing the world as in ending our insane war in Iraq. My generation’s greatest moments were the civil rights act and the peace movement of the 1960s. There is a story in my book that I decided to put in at the last moment: entitled “Bob Hope, Jane Fonda, Heroes or Villains?” When I first wrote the story back in the 80s, I still was not sure of who was the hero and who was the villain. Bob Hope made millions of dollars from wars as he used WW II, Korea, and Vietnam to revive his bad vaudeville act. Jane Fonda damaged her career as she led a protest movement against the war. Who was a villain, who was a hero?

One hero today as I write this is a Gold star Mother, Cindy Sheehan who camped out at Bush’s Crawford Ranch as Bush, a supposed wartime president, took a three-week vacation away from being the Commander and Chief of the Iraq war. All she wanted is reassurance from President Bush that her son Casey died for a purpose. When I was in Viet Nam my mother attended protest to end the war. I was upset at the time, and felt that we as a county could do no wrong. History has proved my mother right. If I had died in Vietnam it would have been a waste of a young life.

For the last two years I have been hearing President Johnson’s echo of “stay the course,” in speech after speech by President Bush. Cindy Sheehan and my mother are real hero’s crying out to put a stop to what appears to be a never-ending unjust war. Today’s generation’s great accompaniments can be to force President Bush to end the war in Iraq, and to end the movement to amend the constitution to take the civil right of marriage away from a minority population of American citizens. 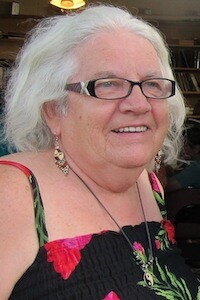 Born in Cambridge, Mass., Janice Josephine Carney is the author of several books including One Heart One Mind: Memories of My Year in Vietnam, July 1970-71, a memoir about her time in Vietnam, and Purple Hearts and Silver Stars, which tells the story of her transition and of her struggles as a Vietnam Veteran with PTSD.