Editor’s note: The Hillsong Church referenced in this essay is the same global megachurch network recently rocked by the firing of Stephen Carl Lentz, pastor of its New York City congregation, for “leadership issues and breaches of trust, plus a recent revelation of moral failures.”

When I travel, I take the opportunity to visit other churches during Sunday worship. About a year ago, I was traveling to Sydney, Australia, on a business trip and decided to visit Hillsong Church’s downtown campus, arguably the epicenter of the Hillsong movement.

While Hillsong is perhaps best known for its praise and worship groups, the larger Hillsong movement is essentially several interconnected Pentecostal churches with renowned worship teams. The downtown Sydney space seemed to me to be a renovated warehouse building, equipped with all of the most advanced theater electronics, as well as fellowship spaces that could serve coffee and food to roughly a thousand people simultaneously via multiple food/drink stations.

You might be surprised that a transgender woman would ever think of walking into a Hillsong church; after all, they don’t make welcoming statements about anyone in the LGBTQI community. Hillsong has nearly no women in leadership and no women visibly leading in worship other than the female voices in the praise band.

You may also wonder if I made it out safely; I am writing this article, so I did. No, there were no issues — and yes, because I pass well, I probably had a lower risk of exposure than some. Yet I couldn’t help but experience a heightened state of alert nonetheless.

Then worship started. The second worship song was played by the same individuals that appear in this video of the same song. The space on the morning I attended was only a bit smaller than the space shown in the video. And as I heard the lyrics, I could feel the spirit speaking to me.

Just take a moment to read through (some of) the lyrics:

Who the Son sets free, oh is free indeed
I’m a child of God, Yes I am

In my Father’s house, there’s a place for me
I’m a child of God, Yes I am

Does this not seem like an anthem that could just as easily be for LGBTQI Christians? And yet this song was written, composed, and performed in a non-LGBTQI friendly space.

I stood there amazed in this holy moment, amazed at how God works in the most unlikely places. The spirit works and speaks, and we often do not know how God will use a situation.

Who the son sets free, oh is free indeed

Jesus comes to set everyone free, as one might remember by looking at the beginning of Matthew 5 where Jesus proclaims that the beloved community is now open to everyone. The spiritual zeros, those who are poor in spirit, are now called blessed, those whom no one would ever even think of being called blessed.

Who am I that the highest King would welcome me?

In my Father’s house, there’s a place for me

We are all welcome, while at the same time, we are all in need of grace. Many of us in the LGBTQI community likely hear these words deep in our souls, having so often wondered if we were welcome anywhere, particularly in religious circles — only to hear that God welcomes us with open arms. And in beloved community, both in its manifestations in Heaven and on Earth, I find that there is a place for me just as much as there is for anyone else.

I am who You say I am

I am reminded of the scripture that speaks affirmation to so many in the LGBTQI community:

For you created my inmost being;
you knit me together in my mother’s womb.

I praise you because I am fearfully and wonderfully made;
your works are wonderful,
I know that full well.

My frame was not hidden from you
when I was made in the secret place,
when I was woven together in the depths of the earth.  (Psalm 139: 13-15)

God has made us, knows us better than we know ourselves, and has called us to our unique paths in this world. We are not defined by what other people say about us, but by God, the one who made us, each of us special in our own unique way. God gave us the gift of being LGBTQI with the mission of fully using our gifts to bring God’s will into this world.

I found it amazing to see God working to create such an affirming anthem, one that would speak so clearly to the LGBTQI community, in that flawed yet deeply moving place. Yes, we would prefer the lyrics to have less gendered language — and yet the core message is still mightily affirming.

Several popular Christian songs clearly speak to the LGBTQI struggle, although it may not be apparent to most of those listening. Lived experience allows an individual to see some aspects more clearly than others because that individual’s journey allows them to see a truth — whether it be through music, literature or scripture.

What else are we missing because we close ourselves off to members of a community whose beliefs seem in opposition to our own — or even to us? Are we not open to the nuances of a community where the Spirit might be working — or will we just write them off wholesale?

Jesus said we are to make disciples of all nations (Matt 28:18-20). All means all. And we should respect the ministries of others, even though they disagree with us strongly on several issues. We should expect the same from them as well.

From Paul’s letter to the Romans:

Welcome those who are weak in faith, but not for the purpose of judging different reasoned perspectives. (Romans 14:1)

Who are you to judge someone else’s servant? To their own master, servants stand or fall. And they will stand; for God has welcomed them. (Romans 14:4)

God has welcomed and empowered every one of us. Who do we consider weak because they have a lesser viewpoint than our enlightened perspective? How do we not judge those who are weak, but rather see the image of God in them, even when they might not yet see it in us?

When I started my gender transition, I was totally surprised at the reactions I received.

I thought I would lose my conservative Christian friends, and thankfully most of them have remained my good friends for more than a decade after my transition. In some cases my transition presented a struggle for them, and yet they worked through it as we walked together through the process. I had a similar experience with other friends’ conservative faith perspectives.

I developed new friendships with conservative Christians who remained friends after learning my full story.

On the other hand, some of my worst experiences and most unwelcoming experiences were at the hands of dedicated progressive individuals.

One might wonder: How could someone in the LGBTQI community get the courage to walk in difficult spaces, or the courage to look at potentially hurtful situations with new eyes.

I do agree it is hard — and yet, with God’s strength, all things are possible. I will say that if you are still healing from a trauma, or if you cannot make a particular journey safely at this stage, do not make that journey, and instead gain your strength.

If there is somewhere not safe for you, do not go there.

Know that God will open the right doors for your journey. When those doors open, go in with the confidence that God goes with you.

Know God is working everywhere and look for the positive opportunities to build connections and enable each other to see your shared humanity. You may be pleasantly surprised in taking the small steps where God leads.

Sometimes it is simply about being present with people, maybe just looking for the humanity of that individual.

A friend of mine who is a pastor tells of going to a meeting and sitting next to another pastor who had a very different opinion on a divisive church issue. He mentions that he would never have chosen to be anywhere near this person — and yet there he found himself, sitting next to this individual over a meal.

In advance of this experience, my friend had experienced considerable anxiety. And yet when the time came for the two of them to meet, the person he encountered was not the exact kind of person he’d expected to find. The other pastor started by asking my friend about his family, and then he reciprocated by talking about his own family. The discussion ended with one praying for the other and his family.

In this encounter, each individual could see the other’s humanity and the image of God in that person. Did my friend suddenly change his perspective on the divisive issue, or did the other pastor suddenly change his? Not likely. And yet, if they got together again, they could have a constructive discussion respecting each other.

God wants to reach everyone. All means all. Everyone in the LGBTQI community is part of that All, as well as those our community sees as “others.”

I hope we can make a renewed effort to see other Christians as those with a ministry in which the Spirit is actively working. The individual you think is your enemy — well, God is with and for that person as much as God is with you.

In the process, we might find that through these “others” the Spirit might be working out beautiful opportunities for us, opportunities that only God can imagine. 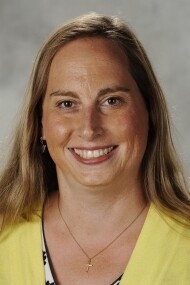 A professor in the School of Electrical and Computer Engineering at Georgia Institute of Technology since 1997, Jennifer Hasler earned an M.S. and B.S.E. in Electrical Engineering from Arizona State University in 1991, a Ph.D. in Computation and Neural Systems from California Institute of Technology in 1997, and an M.Div. from Emory University’s Candler School of Theology in 2020. She has been awarded multiple technical and professional awards, including Georgia Tech’s outstanding adviser award in 2011, and Georgia Tech’s LGBTQIA outstanding faculty award in 2017. Her professional interests span many areas of electrical engineering, computing, neuroscience and theology. She has been married to her spouse since the mid-1990’s and they have two children, Emily and Julie.

Tagged with: the church, transgender