Uncertain of what might greet us when we walked through the doors of the Office of the Town Clerk in the Municipal Building of the Borough of Chatham, NJ, to register for Domestic Partnership, Barbara and I stopped, looked at each other for assurance, and took a deep breath before crossing the threshold. This, after all, is a predominantly conservative Republican town. What were we thinking? We instantly regretted not having gone to Maplewood on July 10 for the statewide registration “event” as one of a sea of over 500 couples who had registered in the celebratory atmosphere of friends, family and children. A modicum of anonymity accompanied by a large dollop of community support suddenly seemed far superior to the very public and intimidating space we were about to enter.

We needn’t have worried. A member of our congregation sat at the desk, looked up at the two of us (we must have looked a fright!) and, in her best deadpan said, “Oh, let me guess. You’re not here for a garage sale permit. Let me get the Registrar.” As I listened to the gale of giggles that followed, I knew the Holy Spirit had previously arranged our reception.

The “Deputy Registrar” greeted us, flustered and apologetic because the Registrar was out for the day and she had no idea where the forms were kept or how to fill them out. She said if we gave her a few minutes, she’d hunt them down and we’d work on this together. We all giggled nervously and allowed as how this was our first time doing this, too, and we were happy she was joining us on this adventure. It was then that a sign caught my eye: ‘You must have an appointment for a marriage license or certificate of domestic partnership. Minimum 24 hour notice. No walk-ins.’ Apparently, the Deputy Registrar didn’t know about the sign, either.

In less that 15 minutes, the files were found, the questions asked, and all the forms filled out, signed, notarized, and sealed. In the process, we discovered that we were not the first registered domestic partnership in Chatham. Turns out, one of the elected members of the Town Council had come in with his domestic partner the day before, so they bore the distinction of having been “the first.” That seemed fitting and appropriate to us. After all, we’ve been at this for twenty-eight years, and although it’s been awhile, it’s far from the first time we’ve had to appear in court about our relationship.

When I returned to the office, I slowly began telling my staff and some of the volunteers what Barbara and I had just done. The word spread like wildfire. I was surprised and taken aback by the emotional responses I got. What are you doing back at work, they wanted to know? You should have at least gone out to breakfast or something! It’s your wedding day, they said.

No. No, it isn’t. Well, then, what? I found myself describing it as “jumping the broom” – a ritual created by slaves to honor their unions because they could not legally marry. Some – but by no means all – slave owners respected couples who had ‘jumped the broom’ by not using the women as convenient objects for their sexual gratification. It was a first step toward being seen not as objects or classifications, but for their essential humanity. It was the first step to the security and protection society affords those who make a lifelong, faithful commitment to each other.

Now, at least, I will no longer have to worry, as I did eight years ago when Barbara had surgery, that I will not have access to information about her health status when she is in the recovery room because I am not “related.” Now, at least, we have the option of filing joint tax returns, like other good citizens. Now, at least, if one of us precedes the other in death, we don’t have to worry that the State will claim the major portion of our inheritance because we are not “related.”

As the reality of my words took hold, one person shook her head and quipped, Gee, I better rush home to check if the status of my marriage has eroded any. Another began to weep. No, it’s right that you came back to work, she said, because we still have much work to do, don’t we? We do, indeed. ‘Liberty and justice for all’ is an ideal which has not yet been realized.

And now, at least for now, it’s back to work. But, for one breathtaking moment this morning, we jumped the broom toward securing the basics of “life, liberty and the pursuit of happiness,” for ourselves and our families. For one brief and shining moment, the vision of the Holy City filled my heart with the deep joy the disciples must have felt when Jesus said: Blessed are you when people hate you, and when they exclude you, revile you, and defame you on account of the Son of Man. Rejoice in that day and leap for joy, for surely your reward is great in heaven.

Surely, a little piece of heaven came very near to us today on the other side of that broom. 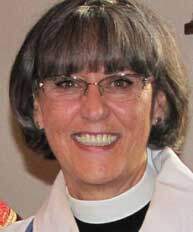 An Episcopal priest in the Diocese of Newark (N.J.), the Rev. Elizabeth Kaeton served as national convener of the Episcopal Women’s Caucus and board member of Integrity USA and the Religious Coalition for Reproductive Rights. A founding member of Claiming The Blessing, she earned a doctorate in pastoral care and counseling from Drew Theological School. She blogs at http://telling-secrets.blogspot.com.