Is religion about the smells and bells, the elements of the ritual?

We have all heard the story about Talulah Bankhead going to mass with Cardinal Spellman. As the procession passed her, the cardinal in his vestments with a censer, she is reputed to have said, “Love the drag, Franny, but your purse is on fire.”

Why is the ritual so important? Why is there such a history of clerical garb? It’s not because clothes and symbol aren’t important. It is because somehow, art allows us to reveal the potent and magical which dwells within us on the outside. Those vestments reveal a very deep, atavistic resonance to symbols of connection, of transcendence.

Being true to our creator is manifesting the gifts she gave us in the world, showing them on the outside.

I, like most transgender people, knew before the age of 5 that I wasn’t simply who people expected me to me by dint of my genitals. I knew. I knew.

Society, though, needed to tell me that what I knew was wrong. What do you do when your religion tells you that you are a sin? I knew this was true, because it wasn’t my behavior that was at issue — it is my nature.

I had to face the issue of sin everyday. Which was the bigger sin — to violate human rules of propriety and comfort, or to deny the truth of my creation?

The answer had to come.

James Green, a man born female, was at an American Psychiatric Association conference. One of the doctors walked by the booth and wanted to know what IFGE was about. He chose to talk to the short bearded man, rather than one of the large, husky women.

James told him it was about transgender, transsexuals.

He replied “I don’t need that. I don’t believe that God makes mistakes.”

James smiled and said, “Neither do I.”

At some point, I had to believe that I am not a mistake, not an illness, not a dysphoria, but a child of God. I had to find a creation myth that didn’t make me a sin, something to be fixed — or destroyed — but that allowed me to walk in pride, believing that I held a bit of God within me.

That came when I heard anthropologist Anne Bolin, who has studied gynemimetic shamans — women born male — say “In cultures where gender is rigidly bi-polar, rituals of gender crossing remind us of our continuous common humanity.”

In cultures where gender is rigidly bi-polar, rituals of gender crossing remind us of our continuous common humanity. The moment I heard that line, I knew it was my personal mission statement — to be how God made me and remind people of how spirit connects all things.

I had to learn that I come from a long line of people who were born to cross worlds, who kept connection in focus. The spirit is the place where worlds collide and worlds connect, even the eternal masculine and the eternal feminine.

This is hard to live. The liminal is the doorway between worlds, the opening in walls where spirits can touch. To be the door is to be the embodied reminder that God connects all.

It is good to be the door — but being the door also means that people will slam you, try to lock you, and to do everything that they can to keep you shut. Open doors are useful, yes, but many are more comfortable when a door is tightly shut, keeping out the barbarians — the people we don’t want to have to see ourselves and see our God in.

I believe that the greatest gift we can give is opening our heart and playing the role God put there — even if society says “I don’t need you, I only need what I want, go away.”

These challenges are why many in our churches have set themselves up not as doors, opening and welcoming, but as doorkeepers, suspicious and defensive. They see their challenge not as living in faith, being open and embracing, but to be defenders of the faith, militant and beady eyed.

A few weeks ago, I had a pastor look me straight at me and say, “My church needs an open gay person, but my congregation is not ready for someone like you. They couldn’t handle you.”

She had set herself up as a closed door, defending the weak people inside from what they couldn’t handle.

That’s a real challenge of being queer — not the people who confront us, but the people who decide that while they are OK with us, other people won’t be, so they have to defend their organization — their church — from people like me. “Well, I’d love to have you, but the children wouldn’t understand, or we would lose membership, or. . .”

You have transpeople in your churches now — or at least you have had them. They just fear showing their nature, because they know you fear them. You fear their passion, fear how they affect the kids, fear they affect how other people see you — you queer lover!

Can you support people who scare you — and who you are scared of being seen next to, because they might draw some attacks?

Art is where we take our God given gifts, shape them with our own sweat and act in the spirit inside — a spirit that is not just placid and earnest, but also dramatic, pretty and forward.

I know now that it was pre-ordained that I do this, to be who I am. I have worked hard to find what I can give to a culture which too often believes that people are their bodies and not their spirits, that the shape of our genitals is more important than the shape of our hearts.

Now, my challenge is having that ordination, and the work I have done to give of spirit to be respected and ordained by you.

Can you find a way to be a door, and accept the gifts God has placed in my heart? Or do you feel the need to close tight, keeping something you don’t know you want or need, something — and someone — who feels dangerous because they cross walls away from those you have decided cannot handle the power of spirit in others?

Can you handle the danger of embracing the connection that threads though us all — even across boundaries that seem as firm as the line between men and women? 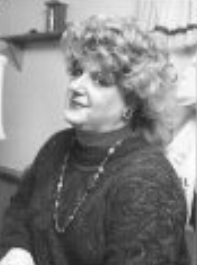 A self-described power-femme drag-mom trans-theologian who finds it very hard to practice what she preaches, Callan Williams is a native Canadian who graduated from high school in Massachusetts and loves Western swing and Latin music, show tunes and cabaret. She blogs at https://callan.wordpress.com