Queer for Jesus! Christian Tradition is a Goldmine of Sexual Strange-ness

Christians do not seem to have been very interested in the topic of sexual identity. With exploding interest in the subject, terms like “queer studies” and “non-binary” might as well have been the names of demons, at least where I came from. The pastor would opine: The Bible says we’re made male or female.

Or was it male and female? Later I had to look a few things up for myself. “The poetical structure of Gen. 1:27 clearly suggests that God himself too was both male and female,” as the scholar Johannes C. de Moor observes.

A bisexed species of a bisexed deity — was the greatest story nobody ever told me. What I didn’t know, until I did more digging, is that the tradition of Christian leaders has been wondrously strange.

But there’s case after case of a tradition that, one might say, hates what it loves. In 2014, Charles Marsh published a biography of Dietrich Bonhoeffer that suggests his sexuality had been a bit hazy. Nothing was certain, but there were clues — like Bonhoeffer and his friend Bethge sharing a bedroom, bank account, going on vacations, fighting, and signing their Christmas cards: “Dietrich and Eberhard.”

Scholars at times just point to the odd absences, as if, for some reason, some things had been erased. In a 2006 paper, “ ‘Was George Frideric Handel Gay?’: On Closet Questions and Cultural Politics,” Gary C. Thomas suggests looking at patterns.

All truth is God’s truth, I say, and perhaps in recovering from a tradition of hatred, we found healing techniques in love. John Calvin “lived in marriage about nine years in perfect chastity,” as his first biographer and successor, Théodore Beza, had noted. What is “perfect chastity”?

A 2009 biography by Bruce Gordon adds: “The intention behind the remark is not clear. Calvin was aware that during his life he was derided by his opponents as cold and asexual.” I had a hunch his wife felt the same.

Of course, there’s Augustine of Hippo, whose Confessions could’ve been filed under queer literature, I suppose. “For I felt that my soul and his were one soul in two bodies, and therefore life was a horror to me, since I did not want to live as a half; and yet I was also afraid to die lest he, whom I had loved so much, would completely die.”

The scholar Alan G. Soble investigated the matter for a 2002 paper, “Correcting Some Misconceptions about St. Augustine’s Sex Life,” and found any homoerotic suggestion “irrelevant” — there was no proof of sex!

The great Jerome had that curious way of representing himself as female, and I don’t even mean that odd scene of him wearing a dress. As Virginia Burrus notices, the great scholar’s writings are full of imaginings of himself as the woman in the Song of Songs, or Mary Magdalene. “Helpless, I cast myself at the feet of Jesus, I watered them with my tears, I wiped them with my hair, and then I subdued my rebellious body with weeks of abstinence…”

Is it just “Christian” in some odd, remote way that we can assign to the mysteries of the past? Or maybe the effects of anti-gay, anti-trans theology as continues to this day.

Be anxious for nothing, as the apostle Paul had written. And I keep wondering, when reading early Christian history, if that had stimulated a kind of revolution in sexual identity. I love the second century’s hero/ine, the plucky cross-dressing Thecla, in the Acts of Paul and Thecla, that seems to evoke a tradition that rather liked the gender trouble.

But there would be Paul’s oddness about being “all things to all people,” as if radical mutability is actually a goal. Or that Galatians 3:28 funny business, where there’s “no male or female” — I wonder if there is not ‘or’, but ‘and’? He seems to prove it in his regular use of feminine imagery, charted by Beverly Roberts Gaventa in Our Mother Saint Paul (2007). He is a woman in labor (Gal 4:19); he’s breastfeeding a child (1 Thess 2:7), or a weaning mother (1 Cor 3:2).

Quite a model for us all, perhaps. By the late 3rd century, the holy kisses were really starting to flow, and some kind of sexual revolution seems to have been occurring. The severe John Chrysostom, in Against the Opponents of Monastic Life, cannot believe everyone is having a good time and not feeling horrible about it. “Indeed,” he frets, “there is some danger that womankind will become in the future unnecessary with young men instead fulfilling all the needs women used to.”

Citing the passage, Boswell finds the suggestion that “gay sexuality was absolutely rampant in the Christian society of fourth-century Antioch from the highest level on down.” One might have even suspected the Christian scriptures, with wonderfully powerful women and aspiration to be a “bride of Christ,” had cultivated some wonderful gender trouble.

I love a thought by Eugene Peterson: “We are sexual beings deeply, thoroughly and inescapably. In the experience of our sexuality we know another, and, indirectly, ourselves. It is also in our sexuality that we know, or don’t know, God.”

I don’t think Peterson, the famed Presbyterian pastor, was gay, though that drama near the end of his life, where he said he believed gays and lesbians “seem to have as good a spiritual life as I do” — to Evangelical distress — remains poignant.

I am less sure about the straightness of Gerard Manley Hopkins, the Catholic priest and poet who was something of a teacher for Peterson, referenced over and over throughout his work. And how perfect to think of queer people as Christian guides, the shepherds in crossing states.

Women had been Bible scholars before her, but “it was to be Katharine Bushnell who would bring out the heavy artillery,” as Catharine Clark Kroeger writes in 1995. An academic biography by Kirstin Kobes du Mez, A New Gospel For Women: Katharine Bushnell and the Challenge of Christian Feminism, came out in 2015 — and reading it, I had little sense of a woman who never married, though lived all her adult life with another woman. And I noticed that she had suggested “the adjective hermaphrodite . . . applies properly to the human species.”

What could that mean? Soon I was poring over old newspapers. “She is tall, angular and earnest; wears spectacles, and has a voice like a boy who is just bursting into manhood,” says an 1889 news story. To look at pictures of Bushnell, it’s not always clear she wasn’t bursting into manhood.

Then I find Bushnell’s social circle being described in Lillian Faderman’s To Believe in Women: What Lesbians Have Done For America (1999). Frances Willard, of the famous Woman’s Christian Temperance Union, was lesbian? Or a woman who “would in today’s parlance be called a lesbian,” as Faderman writes. “As an adolescent, Frank, as she wanted to be called in her youth and later by the women with whom she lived, loathed all things constructed as feminine, especially the pressure to learn to cook, sew, and iron.”

I wrote Faderman, asking her to consider the question of how to “categorize” Bushnell. She replies: “I don’t think she would have called herself a ‘lesbian,’ anymore than I would call myself a ‘queer.’ But those are generational terms.”

I am sure the matter gets very complex, but perhaps it’s a helpful step to allow people to be themselves? Perhaps that would be training in the “mind of Christ” — to see what is there.

There would be the major and the minor figures, if such ranking is even possible. Are all the parts not connected? I was reading a book of Christian history and highlighted a passage about a young man who finds himself becoming the object of fascination of a much older one, an “old bachelor” who pursues him. “From some reason he achieved a very strong attachment for me,” he later writes. “But he was an old gentleman and to me rather repulsive and I did not appreciate his kindness, nor did I manifest any reciprocity, but rather avoided him.”

He accepted the man’s offer to pay his schooling, and so the scholar who located and published the music for what became “Amazing Grace” came to be. As the historian Steve Turner notes in Amazing Grace: The Story of America’s Most Beloved Song, shortly after the young man leaves, this patron dies from a fall from the top of his house.

Sexuality can be a vague, elusive subject, and a dark one, full of steps and missteps. Or at least, one finds oneself summoning judgements. Perhaps it would be spiritual progress — to not.

Had we forgotten Michelangelo? As Leonardo da Vinci seems to have come along for the ride. Had these great artists, so central to Christian tradition, been left up to its scholars, I wonder how much would be known of them? Rather less, perhaps.

It is mostly Renaissance scholars, after all, who’ve discussed the strangeness around Théodore Beza. I read a 1994 paper, “‘That Matter Which Ought Not to Be Heard Of’: Homophobic Slurs in Renaissance Cultural Politics,” by Winfried Schleiner, with more fascination than Calvinists seem to have.

Did we mention the 20th century Evangelical hero Jim Elliot? His famous rejection of marriage might have been because he felt he needed to be a missionary to the deepest jungles of South America. Or maybe there was more to the story.

And I am such a fan of Rich Mullins, the great singer-songwriter of contemporary Christian music, whose talk of a “secret sin” was always a little odd. Never married, but thankfully he had all his male companions to keep him company. I look up old, forgotten newspaper interviews he gave not long before he died. “If people knew the stuff I struggled with, they would hate me…”

I muse, as he continues: “I do the best I can. I have failures and I do not think Christianity is less true because I’m not an exemplary Christian. What I want to communicate to people are what I think is at the heart of the gospel, which is that God loves us.”

I wonder if he had to be himself — to learn that? 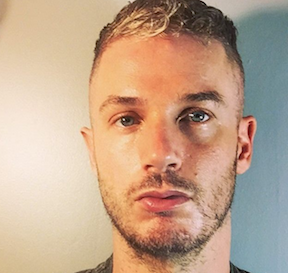 Jonathan Poletti has been published in Roctober, Tablet, the New Oxford Review and Salon and is currently a religion blogger at medium.com/belover.