It is remarkable and fitting that on the day we dedicate to remembering our fathers, we should hear a story about Abraham, whose name means “Father of a multitude of nations.” Just before this morning’s text, in chapter 17, God and Abram have had a little chat on Abram’s 99th birthday. Actually, it’s not a little chat, but a pretty powerful exchange: God has promised to make a covenant between Abram and his people, and he will be the father of all nations. God will give Abram a new name and will also make him exceedingly fruitful, establishing through Abraham a covenant with the generations. Upon hearing this, our text reports that Abraham fell on his face and laughed.

In surprise? In wonder? In awe? In respectful disbelief? After all, Abraham was 99 years old, and his wife Sarah was 90 and well past child-bearing age. They had hoped many years ago to have children, but somehow it had not worked out that way, and the two had grown old together-disappointed, but still very fond of each other and quite content with their life together. Any thought or hope of a pregnancy at this time of their lives was a little bizarre and certainly not the way this couple would have chosen to live out their sunset years!

Later, three men appeared to Abraham by the oaks of Mamre as he sat by the door of his tent. Hospitable, as always, Abraham gave them water for refreshment and food to eat; and as they sat outside in the cool of the late afternoon, the guests told Abraham again that he will soon be the father of a child. This time it’s Sarah’s turn to laugh. Tucked away in the corner of the tent, she can hardly contain herself. It’s an incredulous laugh, since Sarah is well past menopause. It’s laughter with derision: “Oh come on, don’t fool with me, Lord! I’m too old for teasing!” It is fresh laughter as an immediate response to a good joke, which Sarah quickly denies when pressed by Abraham.

Who can blame Sarah for her reaction? Even the young among us know what it is like to age and have our bodies change. And those of us who are older know full well how hard it is for some people to get past the fact of age and see the young person who is still inside the old body. Here is Sarah, at age 90, saying to God: Look, I’m old, I’m tired, I have arthritis and even a little osteoporosis; are you sure we want to get into something new like this now?

But this is when we encounter the marvelous wonder of God, at that very vulnerable moment-when the improbable is mistaken for the impossible, at that moment when we actually believe that our spirits are wasting away, as our bodies are, and God couldn’t possibly have any more surprises in store for us, at that moment when we have settled in to things the way they are, instead of things the way they can be through the hope of God.

Remember George Burns, born on New York’s lower East Side in 1895, beginning his show business career as a street act at the age of seven. For 40 years, he and his wife Gracie Allen were an inseparable and brilliant stage team. When she died in 1964, most people thought George would retire; but instead, he kept right on. In 1975, at the age of 80, he co-starred in The Sunshine Boys and won an Oscar. He continued to entertain us and make us laugh until his death at 100!

There is Arthur Rubenstein, who at age 89 gave one of the most remarkable recitals in the history of Carnegie Hall. As a result of a serious eye condition, he could no longer see well enough to read a note of music or even see the keyboard; but relying on memory and touch, he played brilliantly and with unquenchable fire.

Or Philip Johnson, the great architect, who will turn 90 on July 8, sitting at the Four Seasons, a restaurant he designed 37 years ago, saying he was considering retiring at 100, but he is much too busy; he’s moved up his retirement party to 106!

The list is endless . . . Anna Mary Moses, switching at 88 from embroidery to oils because it was better for her fingers; Margaret Mead, at 72, returning to New Guinea to restudy her original study, some 48 years later . . .

Lest you begin to think that only those who are famous handle aging well, look around this sanctuary and around FCCB, at the steady stream of those in their 80’s and 90’s who lead stimulating, creative, and dynamic lives that have nothing to do with their chronological age and everything to do with their spirits, which are ageless.

Perhaps the point God is making with Sarah and Abraham is about the way God keeps promises and the way we human beings are called upon by God to hope and keep hoping throughout the course of our lives. Both Abraham and Sarah give us a saving lesson on how to respond when we are called out of our ordinary patterns of living into new adventure, new life, and new hope. They help us to understand what it means to let go of our expectations and trust in God as we are thrust into the uncertainty of a new future. What is wonderful about this story is that for Sarah and Abraham, life changed dramatically, just as they hoped they could settle in . . . and when it changed, God gave them a laughing hope.

Isn’t that the way it is? Just as you were getting ready to settle into your retirement years, your spouse comes home one day and says he wants to go to seminary. . . . Just as you were ready to commit to living your life as a single person and everything seems to be in place, your next-door neighbor calls you up for a date. . . . Just when you were getting ready to enjoy a quiet summer, your mother calls to tell you your dad just came home from the doctor with a fibrillating, enlarged heart.

Perhaps this is how Sarah felt as she crawled into bed with her husband that night after receiving the news. Life is full of surprises; sometimes we are ready, other times literally thrown off guard by the sheer weight of the news.

In a sermon entitled “Late Bloomer,” Barbara Brown Taylor imagines what was going on in Sarah’s mind as she crawled into her bed that night:

And yet what better way to live than in the grip of a promise? To wake in the possibility that today might be the day. To remain wide awake all day long, noticing everything-the shade of the olive tree, how the smell of the fields processes from east to west, and how the smell of the fields changes from green grass to yellow hay and the sun heats up overhead. To search the face of every stranger in case it turns out to be the angel of God. To take nothing for granted. Or to take everything as granted, though not yet grasped. To handle every moment of one’s life as a seed of the promise and to plant it tenderly, never knowing if this moment, or the next, may be the one that grows.

To live in this way is to discover that God is always blessing us. It does not come in the future if we only have the patience to wait. It has not already come to those of us who are older and have lived more of life than what is to come. The blessing and the promises of God are now. It may not be fully realized or fully in hand, but we are called to live with a laughing hope in God’s promise today.

This is what Abraham and Sarah found out late in life; Sarah was entering into her 90th year and Abraham his 100th. In all of life and in all its stages, the Lord blesses us and we in turn bless the Lord. This is the dynamic growth of holiness and wholeness; and it can go on and on and on, throughout all ages and stages of life. This is what the psalmist had in mind when he wrote, “so that your youth is renewed like the eagle’s.” (Psalm 103:5) This is the spiritual path we embark upon when we place our hand in the open palm of God.

Oliver Wendell Holmes saw it in the life of the chambered nautilus, that mysterious sea creature which, as it grows, moves from one chamber to another, scaling off the old one as it moves to a new and bigger one. Wrote Holmes:

Build thee more stately mansions, O my soul, As the swift seasons roll! Leave thy vaulted past! Let each new temple, nobler than the last, Shut thee from heaven with a dome more vast Till thou at length are free Leaving thine outgrown shell by life’s unresting sea!

When Abraham heard the news that we would father a child at the age of 99, leaning hard to a century of life, he fell on his face and laughed.

When Sarah heard the news that she, a barren woman and all of 90 years old, would soon become pregnant, she lost her demeanor of control and began to laugh.

Abraham and Sarah believed in God’s promises and dared to hope.

As Paul reminds us, “hope does not disappoint because God’s love has been poured into our hearts through the Holy Spirit which is given to us.” 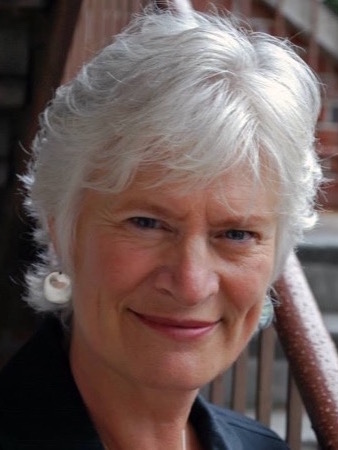 Retired as senior minister at First Congregational Church of Berkeley (Calif.), Rev. Patricia de Jong also served at the Urbandale United Church of Christ in Des Moines, Iowa, and as minister of education for christian discipleship at The Riverside Church in New York City. Her roots in social justice began in campus ministry, where she served in Michigan, Oregon and California. She currently teaches at the Omega Institute, Esalen Institute and the Theater School in Sonoma, Calif., and chairs the board of directors of Church World Service.