Coming Out as a Sacrament in Argentina: My Road to Reconciliation

U. S. Roman Catholic bishops first published a pastoral letter to parents of homosexual children in December 1997. In Argentina, however, our Catholic leaders have provided no such document to guide and orient us regarding God’s gift of sexuality. When I first read the document I was deeply moved even by the title. “I am gay, but before all a son.” I took the English copy to a Catholic publisher here and tried to convince them to translate and publish the document, but to no avail.

In 1998, however, Dignity sent me a copy of the document already translated into Spanish. So again I visited the Catholic publisher, this time with the Spanish edition in hand, to see if they would now publish it in Argentina. Two weeks later, the publisher called to tell me that they had decided rather to publish an announcement about the publication in their Sunday leaflet (which includes the lectionary Scripture lessons and comments and is distributed free each week to all who attend mass in all our Catholic parishes) — and give my name, address and phone to permit interested readers to request a copy from me directly! With Argentina’s 30 million population, some 90% Roman Catholic, what kind of response should we prepare for?! The announcement was published the third Sunday of January, 1999.

Soon the requests began pouring in, mainly from the interior, by phone, fax and letter — more than 150 to date — from parents, catechists, priests, and seminarians, many with moving expressions of need:

“I need this document to be able to give some answers and above all words of hope.”

“I’m praying for you, your plans and family.”

“I need a copy for my husband, because his brother is gay and he wants to understand him better.”

“May God put his good hand on you to bless you for undertaking this ministry.”

Many who received the document wrote again:

“Profound thanks from a mother who loves God and her son very deeply.”

“The document is beyond reproach.”

As I reflected on this outpouring of response I recalled how from infancy my life had been signed by sacraments: baptism at birth, penitence and my first communion when I was 8 (penitence was also known as “reconciliation”), confirmation when I was 13, marriage when I was 27, and still with the expectation of final unction before death. However, only when I came out as gay did I come to know fully God’s gift of the sacrament of reconciliation. And it is concerning this gift of reconciliation that the U. S. bishops’ letter speaks.

This “coming out” stage of my life, providentially, was marked at the beginning with another gift from God.

At first, in December, 1991, the Argentine Supreme Court upheld an appellate court decision denying legal status to the CHA (Community of Argentine Homosexuals), at that time our country’s only gay rights organization. That decision provoked such a national and international scandal that our President, Carlos Menem, removed the director of the government office involved, whose replacement then without further ado, granted the legal status solicited by the CHA.

That entire conflict, at times thunderous, was amply covered by the media. However, throughout the entire process the medical establishment, psychologists and lawyers, with their professional societies and lawyers, maintained absolute silence about the case. Why such total silence?

In face of this deafening silence on the part of university researchers, I began to voice my complaints and demanded an explanation from the secretaries of research in various faculties in the University of Buenos Aires — and even managed to get an article published in an intellectual journal denouncing the shameful silence.

The only professor who owned up to the situation and answered my complaints responsibly was Enrique Oteiza, who directed the Center for Research of the School of Social Sciences. “The absence of research in this area is a sign of backwardness, and lack of professional ethics,” he asserted, and committed his Health and Human Rights Section to prepare a research project on homosexuality.

The resulting project, Homosexuality and Human Rights in the City of Buenos Aires, was prepared by a team of investigators in May, 1994, to be carried out from 1994 to 1997, and was approved with the highest classification by the University’s Secretary of Science and Technology. In 1997, this investigation of gay and lesbian identity, homophobia and human rights was completed on schedule, published the following year, and remains the only such university investigation in this area in Argentina.

When I read my name in the preface and was presented with a copy of the new publication I sensed that my coming out in my university had resulted in a kind of sacrament of reconciliation with my profession as researcher.

Another dimension, however, proved more painful. In 1992, I was finishing my doctoral thesis in the School of Pharmacy and Biochemistry. This put me in an odd situation as a philosophy grad working on a history thesis in physiology, but I was glad for the company of other doctoral students on scholarship. One of them discovered that he could converse freely with me about AIDS, photography, the death of his grandfather and various situations in the university that bothered him. Our intimacy increased without my realizing it. But one day when I realized that I was thinking of him constantly. I realized I had fallen in love. I had to recognize the truth in the assertion that often we don’t realize we are gay until we fall in love with someone of the same gender.

In March, 1994, I was able to tell him that I was in love with him, but he responded with surprise “So that’s what this was all about!” and recalled all the care and concern I had been showing for him. He also seemed to recognize, without being able to admit it openly, that I had touched on his own deepest secret. My confession proved too great a challenge and turned out to be the last of our conversations.

However, by falling in love with this person I was able to receive the gift of reconciliation with myself, experience inner healing from my own internalized homophobia, and stop denying God’s gift of my sexual orientation.

Already, in mid-1993, my wife and I had initiated a divorce by mutual consent, the judge rapidly dissolved the marriage and I left the house I had shared for 15 years with her and my two children. When the divorce was over I felt that I could begin to speak more freely with those who were still family, even though we no longer lived together. However, when I began to share with them my experience of falling in love, both my daughter and my mother were devastated, and their homophobic anxieties separated them from me in a way the judicial sentence had never accomplished.

On that occasion my son, then 13 years old, expressed solidarity with me and reprimanded his mother and older sister, reminding them that Paul’s letter to the Galatians says “In Christ Jesus, …, the only thing that counts is faith expressing itself through love.” Later, when I was able to converse more tranquilly with him to see how he felt, his response was still firm: “How could I feel ashamed of my father for being honest about who he is. I’m really proud of you!”

That solidarity I experienced as a sacrament of reconciliation with the fundamental elements of my faith.

When our discussions about homosexuality appear to cancel each other out from the beginning with a Catholic who insists “The Catholic Church says that …,” we need to ask where our Catholic friend is coming from, since he or she also is church.

With such an interchange both the affirmation and response represent a cry for reconciliation. When I let my mother know about my sexual orientation and after a few other comments, she responded that she really didn’t care whom I slept with.

The conversation went in other directions and we left. But days later I began to feel angry about the indifference my mother had expressed. With her language my mother had now affirmed her indifference to my spiritual welfare expressed corporally, although years before this had been very important to her when she had attended my wedding. After that exchange, for almost three years I had little contact with my mother, who lived in another city. Then, in 1998, my mother visited family members in Buenos Aires and when I heard from my daughter that she wanted to see me, we arranged to meet. I was able to remind her about our last conversation and expressed my resentment about her attitude. She insisted that the Bible backed her up. Sensing that we had to agree to disagree, I let the matter drop. I accompanied her to the train station for her trip back home and she said she planned to return in two months for Christmas and the New Year, so we would see each other soon.

But my mother then died suddenly just a week before Christmas. When I heard, I was glad I had listened to my daughter’s exhortation to meet with my mother again and not let resentment get in the way of our reconciliation.

That was the way I experienced the sacrament of reconciliation with my mother and the mercy I hope to receive from God.

When, in 1992, I criticized my fellow scientists for their irresponsible complicity in the Supreme Court’s homophobic judicial decision against the CHA, I really began a process of spiritual revelation communicated to us in the sacrament of reconciliation.

Because, in reality, what I was doing was to exhort myself to accept God’s grace present in my life now and to trust in the unfailing mercy of Jesus and begin to walk the road of reconciliation with myself in order to experience reconciliation with others. 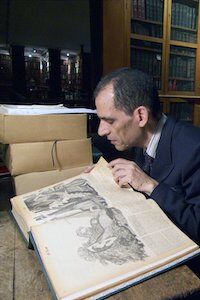 Ariel Barrios Medina holds a Ph.D. in history and served in the Department of Scientific Journalism in the School of Pharmacy and Biochemistry at the University of Buenos Aires.