I was lying around in the quiet of my home when the final wisps of summer were brewing in the sunlight, beckoning me to play. I had just got home from the first day of my senior year of high school and I felt no less gay or insecure because of that fact. I was one of those teenager shadows in high school who thought more than he spoke because he only ever felt alone with a group of people, he only sort of knew.

After breathing in the final remnants of summer, I retreated to the solitude of the beach. To my pure astonishment, no one was there. The sand was no longer a scorching blanket, but cool and crisp; the only traces of warmth lingered in the spots that met the sunlight.

I placed my towel only a few feet away from the water and lied flat on my stomach with my arms outstretched. A peaceful war zone started to spring up around me. The sand rioted and forced itself into my eyes and the reflection of the light on the waves beamed intensely aggressive but beautifully green. But despite these distractions, my mind settled into a state of calm. I listened quietly as sand lifted into the air and the waves quietly broke.

The previous summer flooded into my mind as I marveled at the wonder of the ocean. I thought of the conference I went to in July with my Catholic youth group, held at Chicago. One day, a speaker had told us to write down one thing we learned that day. After a few thoughtful moments I wrote down the most basic thing I knew — that God loves me.

Among a sea of hearts and bodies, I realized that God loves me because God made me. To the Creator, it does not matter that I am gay, that I lean to the political left, that I like to wear tight shorts and sheer tops, that I was an Honors student with a laudable GPA, that I sin like sinners do, or that I am mostly selfish and fail to do what God asks of me because I am scared or forgetful. To any human being, these aspects help shape the vision that people have of me. To God, these do not matter because I am the Creator’s child that God is joyful to love.

Though my epiphany in Chicago was heartwarming and reassuring, I continued to battle with my sexuality during my last year. I resented many qualities that made me who I was. There were moments when I looked at my reflection and told myself that I was ugly and did not deserve love. I hated the sound of my voice, and the way I carried myself through the hallways at school, with pounds of self-consciousness leaking from every step.

This harmful self-pity sunk into the pit of my stomach, but I always knew I could change it. I knew that I did not have to be unhappy or think so low of myself. I never discussed my affinity with men to anyone and I would shush the friends that knew about my liaisons with men before they even said anything. I tried not to show the sadness or emptiness I felt on the inside, because I wanted them to think I was okay to be around.

Meanwhile, my relationship with my parents was brittle. In February, the trust between us broke after we discovered I rang up the phone bill to vomit-inducing amounts by the international contact of my then boyfriend from Brazil. I wanted to distance myself from them because I wanted them to forget and I wanted to stop feeling embarrassed about myself. I knew what they thought of gay people—that they were abnormal, weird, unnatural, disappointing.

One day after school I was sitting in the kitchen with my parents across the table. I decided to tell them how I felt over the last few months: “I’m not happy right now. I feel like I can’t talk to you. I come home and you never ask me how my day is. You never ask about my friends or anything that happens. You never say you’re proud of me for anything. We don’t have actual conversations. I can only talk to my friends about some things and I can’t talk to you about them.”

At this point I started to cry. I looked over at my dad, who was looking down at the table; his eyes were shining wet. I really wanted him to say something, to tell me everything would be okay, but he kept silent.

In a sympathetic voice, my mom told me: “We do love you and we are proud of you. But we just don’t want to talk about some things because we don’t want to be disappointed.”

I remained at the table crying, feeling as if I were the only one who wanted to work for a healthy relationship. It became clear to me that I was unhappy because I felt that I had to hide my sexuality, in fear of them not accepting me. I preferred the empty, surface level conversations we had with each other because I was intimidated by what I imagined would be the utter destruction of it all.

While I decided to keep a safe distance from my parents knowing the inner workings of my heart, I still prayed that one day I would be strong enough to be completely honest with them.

In the meantime, I grew more comfortable with my sexuality toward my friends and started coming out to them. Though I was nervous and scared, our relationships ultimately strengthened as a result. The support from my friends was enough inspiration for me to start working on my happiness and confidence and building a better version of myself.

When Lady Gaga brought her “Monster Ball Tour” to New Jersey, my family reluctantly accompanied me to see her. Watching the “Little Monsters” be brave and inspired by the “Born This Way” movement inspired me to be myself. We sat at the top row of the Prudential Center, amidst a chaotic ocean of glitter and sweat-covered fans of all ages dressed in living clothes that seemed to shout “WE DON’T CARE WHAT ANYONE THINKS.” The infectious energy surrounding us concocted into a fizzy mixture of nervousness and liberation that pulsed through my body— I was at a Lady Gaga concert with my parents!

Since they weren’t the most accepting of gays, I was afraid they would judge the men in tights or the young boys in makeup, but I wanted them to be there. I wanted them to see a part of me that I kept hidden, because whenever Lady Gaga sings “Born This Way,” she is essentially singing about me. I felt brave to be seen with the people who were bold and relentless, and held hands with the same sex. Fortunately, my mother at least, seemed to be excitedly enjoying her antics and performances, singing and dancing along.

At one point in the show, during a breakdown of Gaga’s gospel-tinged song “Teeth,” she surprisingly started talking about Jesus: “Some people say that Jesus only loves a certain kind of people. Some people say that Jesus only loves one kind of person and not everybody, not every religion, or every race, or every ethnicity, or sexual orientation. But Jesus, you have blessed me. And I know, leading to death, in front of 20,000 people every night on a world arena tour, that Jesus loves everybody. Jesus loves everybody!”

That message stuck with me the entire night and remains with me to this day. Lady Gaga and her message of self-love and self-acceptance was the gift that God bestowed upon me to help me form a deeper love for myself.

Like Jesus, Lady Gaga helps the weak and afflicted raise themselves up to believe in love as well as their inherent perfection as the children of God. She teaches those who are mocked and forgotten to be brave. With “Born This Way,” she has also taught me to believe in my worth because I am from God and he made me perfect, though my actions are not.

I needed to be at that conference so that I could understand God’s foundational love for me as both a believer and member of the LGBT community. I needed to hear Lady Gaga sing that I was born to be brave and that God makes no mistakes because I had no love for who I was.

I am no longer afraid of what is in my blood. I believe in the strength of my faith, because despite those who wanted to tear me down and make me feel undeserving of God’s love, I remain standing and continue to strive daily for a cherished relationship with God. Though being gay was an obstacle for me to love myself, it was never one for the Lord.

The battles that occur within are of no match to the everlasting love of God. The abundant pieces that make us who we are and the truth that courses through the blood of our veins was all perfectly designed by God, because the Creator knew us before we knew ourselves, to make us into the unique children whom God calls by name. 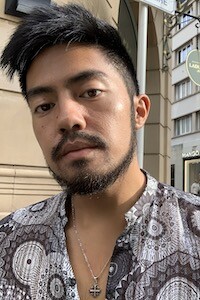 An iconoclastic pop artist of Millennial teenage dreams and painter of the oceanic soul, Nikko Espina believes that all followers of the Christian faith are called to act toward social justice and liberate and uplift all disenfranchised and forgotten people. Jesus is his main inspiration for radical love and self acceptance. Click on the Instagram icon below for snapshots of his daily life, cute selfies, poetic musings, and strides toward justice and equality for all.