Lepers, Loons and Losers | The Outcasts of the Gospels, Part 12: The Poor Widow

As Jesus looked up, he saw the rich putting their gifts into the temple treasury. He also saw a poor widow put in two very small copper coins. “I tell you the truth”, he said, “this poor widow has put in more than these others. All these people gave their gifts out of their wealth: but she out of her poverty put in all she had to live on. (Luke 21: 1-4)

There were a group of people at the time of Jesus who were known as the “anawim,” the little poor ones of God. These were people who, in the eyes of the world, did not matter. They held no power, possessed no economic might, the only person in high places they knew was God, Yahweh. And it is Yahweh, they trusted, who took notice of them and would raise them to a level of importance not usually afforded to them. Such is the case of this poor widow.

In the cultural scheme of things, this woman was poor on a few levels. As a widow she had lost someone who could speak up for her and provide for her. There is a poverty of spirit, a loss of companionship and intimacy that a spouse affords. Because there was no one to provide for her material needs, she felt the pressure of economic uncertainty as well. Yet for all of this, her priorities were sure.

Jesus was sitting by the temple treasury noticing the offerings deposited there by the rich and well-off. Their offerings were acceptable and appreciated, but in the words of the great Lutheran pastor and martyr, Dietrich Bonhoeffer, these offerings were “cheap,” they cost the giver nothing and demanded nothing from them.

A poor widow comes to the Temple, an invisible person of little account. Yet perhaps in her abject want and her continual need to depend on God’s love and mercy to supply her daily needs, she had developed a deep, intimate relationship with her Creator, the kind of relationship only the “anawim,” the poor in spirit, can cultivate. She approaches the treasury, and amid the large and generously “cheap” gifts, appears the humble presence of two little coins, given by the hand of one whose offering of love was the faintest shadow of the greatness she possessed. Jesus takes notice of so great a gift; he always takes notice of something offered in love and devotion, and he praises this invisible woman, invisible to the world, yet glowing like the sun in the eyes of God.

Some of us have economic or social distinction. Some of us have finances that offer a certain amount of independence and freedom from want and concern about the future. But when it comes to reaching out to others, to extending ourselves beyond ourselves, do we practice “cheap grace,” cheap giving, or do we, as Mother Teresa often urged, “give until it hurts”? While the giving of money may not be ours to do, there is always the gift of self. We may feel that what we have to offer is only about two cents worth, barely noticeable in the face of so much want and suffering. Yet Mahatma Gandhi said that his followers should do what they were able to do in order to make the world a bit more endurable, regardless of the magnitude of the gift.

Time spent in prayer for another, time volunteered to help the many organizations that seek to dry weeping eyes and give strength to shaking limbs and hearts, the offering of a smile or word of encouragement, these may not seem like much, and the world may never take notice. But Jesus remains seated by the treasury of God to see what you and I will do with the varied riches lavishly bestowed on us by a gracious God who will demand an accounting of these gifts at the end of our life.

Even if it is only giving your two cents worth … give it anyway. 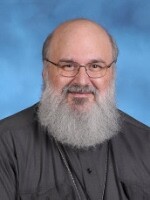