It’s always been awkward for me as a pastor to talk about Mother’s Day. But I keep getting drawn to it, I still feel moved to relate to it.

I was in foster care from ages five to 11. I have not met my birth mother since then. Then I was adopted by a single father, so my memories of motherhood are somewhat limited.

I also know that not everyone has had a relation with their birth mother that they treasure and so some churches will avoid this day, believing that to raise this issue is to raise all we wish would have been different in our families.

But I think that could be a mistake. If the LGBTQ+ movement has taught us anything, it has been to re-imagine families. When I was a graduate student, I had a professor write an article titled “Making the Family Functional.” It was a case for same-sex families, and the first step in that piece was to identify the functions of families, what do they do? And to move away from the question of what are families, who constitutes them, what is their ontology?

In other words, you can identify families with those that do family. They provide nurture, support, freedom to grow, security, and relations that can last a lifetime. They provide your first moral lessons, indicate what kind of world you live in, and pass on memories and traditions.

That should be biological families, but it isn’t always. Yet for any of us to be who we are here today, we had that in some measure from some important people in our lives.

In talking with the Department of Human Services, I was surprised, though I shouldn’t have been, that most of the folks taking on foster and adoptive children are relatives who had to step in to raise children. They included grandparents, aunts, uncles, and cousins. In my own birth family, I have connected to a birth sister who, being 12 years older than me, performed that task of parenting.

That’s a burden no child should be asked to take on but I remain grateful, nonetheless.

It indicates an inner drive in us that theologian John Cobb calls responsive love, one that yearns to relate to others in ways of love and support and connection. That doesn’t always work, it can become misdirected or blunted by other drives. Human beings are complex that way. But there is something basic to be found here.

I found it in other people. I had a range of foster mothers and memories that I carry with me. I also had other mothers of friends in high school.  I suspect some of you have been that kind of mother, the one the neighbors’ kids connect with. One that comes to my mind is Nancy Norsby, who was also a teacher’s aide. She provided the role of motherhood for countless kids in the school system.

I found it in the church. I found a safe welcoming environment growing up. The first person I came out to was a pastor. I would wish that every church was that safe and welcoming that young people could come out to their pastor.

I found it in friendships that in my adult years have defined my sense of self and ways of relating to the world.  This is often what many LGBTQ+ folks mean by “chosen family.” And they sustain us when our biological family could too many times not.

For any who have been in graduate school, academia can offer thick relationships. For some, activism has provided those relationships.

In all this, responsive love happens; it’s not tied to biology or station in life. It’s more fundamental than that. It’s how I think of Easter and the meaning of Jesus.

I do not call you servants any longer, because the servant does not know what the master is doing; but I have called you friends, because I have made known to you everything that I have heard from my Father. I am giving you these commands so that you may love one another.

The divisions between each other, between God and our world have fallen apart. In the ministry of Jesus, the early church saw, for a moment at least, the ability to be one with each other and with God in saving ways.

Ultimately that is why I also get drawn to holidays like Mother’s Day, Father’s Day and more. They point to all those people, resources, events, features of our life and relations which sustain the human person, allow us to grow, to develop, and to love.

That is my understanding of God. By bringing in these holidays, we announce that the God of the Bible is the God that is alive now, at work, sustaining, nurturing, and growing us. It was never dependent on biology or station in life. It was dependent on all those who as theologian Rita Nakashima Brock writes, “embrace the eros that empowers human beings as social creatures to seek others and deliver salvation…” 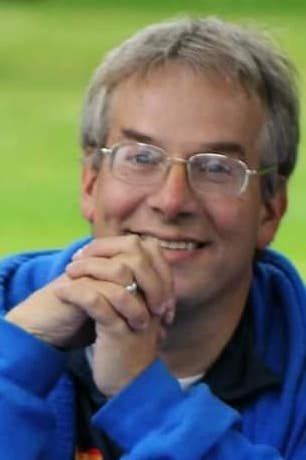 An ordained minister in the United Church of Christ, Rev. Dwight Welch is the campus minister at United Campus Ministry at Montana State University Billings, where he also serves as a part-time philosophy instructor. He is married to Jim Reindollar and is owned by two cats, Annie and Adler. He blogs at Approaching Justice.