The Cost of Discipleship

It happened again last Sunday: someone shaking my hand at the door after church said, “I just love that blessing you use. Can you make me a copy of it?” I love it, too – that’s why I just about always use it when I have the chance.

“Send us anywhere you would have us go, only go there with us. Place upon us any burden you desire, only stand by us to sustain us. Break any tie that binds us, except the tie that binds us to you. And the blessing of God Almighty – creating, redeeming and sustaining – Be with you this day and always. Amen.”

The truth is it’s actually kind of an heirloom.

“Do we really mean it?” I asked myself driving home from church. Send us ANYWHERE? Place upon us ANY burden? Break ANY tie? I mean – it sounds great . and faithful . and empowering and all that, but how far is too far? Which burdens are too great? And what ties are too precious to let go of?

I guess what I was looking for were some loopholes. And so, having been raised to go to the source on questions of this sort, I turned where anyone who considers themselves to be a biblically orthodox Episcopalian would turn: to the Holy Scriptures appointed for the day.

There were no loopholes.

For a minute thought I had one in Deuteronomy. “I have set before you life and death,” says the Lord in the people of Israel as they entered the Promised Land. “Choose life,” challenging them to choose between following a Living God and worshipping dead idols. Well, all right then – there it is: do justice, love mercy, walk humbly and ditch the golden calf. That should cover it.

Not so fast, says Jesus – to me and to the crowds who came to hear him speak about the kingdom coming in their midst. Avoiding the obvious idols isn’t all there is to this discipleship stuff. “Whoever does not hate mother, father, etc. cannot be my disciple.” Does Jesus really want you to hate your mother? Of course not – but by using the traditional Middle Eastern rhetorical device of hyperbole Jesus is making abundantly clear that there are NO loopholes in his call to those who would follow him – to those who would be his disciples – to us.

It turns out, of course, that the idols we’re tempted to worship come in an infinite variety – and most of them look nothing at all like the fabled golden calf. Instead, they are insidiously disguised as the very things that the God who created us to Choose Life gave us to make that life rich with love, joy and relationship. Honor your mother and father but worship God alone. Follow the Law but don’t let its letter blind you to its spirit. Pray for the unity of the church but do not sacrifice your brothers and sisters in Christ on the altar of the idol of uniformity.

It is impossible for me to consider these texts – consider the cost of discipleship – and not be aware of the price being paid today by 21st century disciples following where they believe Jesus has called them to go. “Send us anywhere you would have us go” sounds great until where you’re sent to go becomes the source of schism and strife for the church you love. “Place upon us any burden you desire” is all well and good until the burden is having what you believe is God’s call dismissed as political agenda, cultural relativism, and apostasy. “Break any tie that binds us” makes sense until those ties are family ties – until suddenly you face being booted out of your Anglican Family of Origin because other family members disagree with your understanding of where the Gospel has called you to go.

But here we stand – out where we hadn’t planned to be sent bearing burdens we hadn’t asked to bear hanging onto ties that may or may not survive the challenges they face. Which is when I claim the rest of that blessing – the “but go there with us, stand by us to sustain us, except the tie that binds us to you” part. That’s the promise of the God who calls us to choose life – to walk in love – to believe that the Good News we are called to proclaim is worth the cost of discipleship we are sometimes called to pay. So who needs loopholes when we’ve got that kind of guarantee? 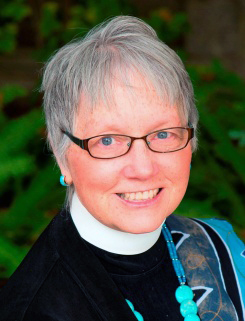 Los Angeles native Rev. Susan Russell serves as assisting priest at All Saints Church in Pasadena, Calif., and as Canon for Engagement Across Difference on the bishop’s staff in the Diocese of Los Angeles. Active in LGBTQ and women’s issues, Susan served as president of Integrity USA (2003-2009) and continues to serve as convener of Claiming the Blessing. A founding member of the HRC (Human Rights Campaign) Religion Council, she has also served on the National Clergy Advisory Board for Planned Parenthood and as a member of the Task Force for the Study of Marriage for the Episcopal Church. In 2018 she began co-chairing the Episcopal Church’s Task Force for Communion Across Difference.