Delivered during the only worship service conducted solely by LGBTA people at the Ninth Assembly of the World Council of Churches in Porto Alegre, Brazil

This week, more than 4,000 people have gathered under one of the most diverse, inclusive “tents” the world has ever seen: Christians from 347 denominations literally from around the world, observers and friends from other religious traditions, have gathered! We are worshiping, praying, studying the Bible, listening to each other, engaging some of the most pressing concerns that face our ever-shrinking globe today, entering into conversations across barriers with courage and hope. We’ve come together to learn, to teach and to be in wonder and awe at the transforming grace of God.

Our context is a world torn by war and violence, especially, in these times, religious conflict. There is much pain, insults and counter-insults being hurled. Freedom of speech and mutual respect are all in question and under attack.

How can we live together in peace?

Even Christians have trouble doing that among ourselves, at times.

Our context is also the beautiful and vibrant country of Brazil — a truly multi-cultural place, teeming with some of the most amazing species of flora and fauna in the world: a country struggling to cope with a changing, growing economy and the political, economic and spiritual needs of its varied and passionate people.

In this context the Church of Jesus Christ in the 21st century struggles with its own integrity, its own challenge to embracing diversity and inclusion, as values to be lived out. Sometimes I think of the church as that woman in the biblical story who was hemorrhaging for so many years, until she dared to touch the hem of Christ’s garment. The Church is much in need of the healing, grace-filled transformative power of that touch today. The Church is hemorrhaging with the ways it has conformed itself to the values of this world — materialism, perhaps the most egregious — and not been transformed into the “realm of God” here on earth. The Church, in many places hemorrhages with sexism, racism, classism, and yes, homophobia. It has been seduced by the structures of this world, and is a weak voice for justice and transformation, unable to clearly speak truth to power.

Metropolitan Community Church comes to the WCC as a denomination/movement of people who have been healed and transformed by the powerful touch of a living Savior, whose mercy and love have reached where the institutional church would not and could not reach. We bring good news to the WCC, good news of spiritual healing and of “turning the world upside down” that is happening every day among LGBT people, our families and friends, and people living with HIV/AIDS.

This week we have been privileged to study together in a daily Bible study, authored by amazing people from around the world. We learned about the Dalits, the untouchable peoples of India, who are 250 million people, most of them Christians. In fact, most Indian Christians are Dalits. Yet, even there, the church of Jesus Christ is often complicit in the oppression of the most needy, excluded people, instead of being on the forefront of liberation and transformation of the culture. We understand that this contradiction, for too many of us have experienced our own version of it.

It is our experience in MCC that the Christian Church as a whole, and in the majority, is very reluctant to have the conversation about justice, inclusion and human sexuality. The fact that this WCC Assembly is actually having such a conversation is a major breakthrough. The fact that our new General Secretary, Dr. Samuel Kobia, is willing to speak out about HIV/AIDS, tell his own story of his family, and encourage dialogue around human sexuality is an act of courage and a sign of hope. We are grateful for his leadership.

And why are we here? Why are there visible LGBT and LGBT-friendly people at the Assembly? Why are we offering workshops, worship and making our presence felt?

More than that, we are here because:

We seek justice for our people world-wide, just basic human rights. The organization “Human Rights Watch” recently published an 81 page paper entitled “Hated to Death” that documents the murders of gay men in Jamaica. In the last 18 months, Twelve gay men have been murdered, some of then HIV/AIDS workers and community organizers. No one has been held responsible; and no one in the government, university or the churches is speaking up, offering support or shelter or help. We are here to publicly call on the WCC and its member churches to repudiate violence against people for their sexuality or their HIV status. Our people need help, desperately, in Jamaica, and in many other places all over the globe.

We are here seeking justice for our families. LGBT people have families, and in many places in the world, we face injustice, hatred and violence on a daily basis. The laws of most countries discriminate against our relationships, our children, our families.

We are here to encourage the churches to do justice within their own communions when it comes to people with HIV/AIDS, and those who are lesbian, gay, bisexual or transgender.

But, truthfully, we did not come just to ask for help, though we do need help. We came, even more, because we have so much to offer to the wider Church and global community:

1) We have a passion for the gospel of Jesus Christ, because it is that good news that has set us free, and redeemed and transformed us. We have a story to tell — of lives that have been saved, blessed, made whole! Jesus is among us and with us as we claim our sonship and daughtership in the community of faith! We have a testimony about the power of the Holy Spirit to raise up a church, a movement, new communities filled with hope and love. We bring a story of renewal and revival in a moment when the church most needs it!

2) We have come out! And we have all been changed and transformed by the experience of coming to terms with our identities. Our suffering, our struggles, have been a source of grace and spiritual growth. We have come out of isolation into community, out of self-hatred, in some cases, to a sense of healthy self-esteem. We are ready and able to help others in their coming out processes. We are ready to help the church come out of its denial, homophobia and AIDS-phobia. Coming out itself never killed anyone, but not coming out is deadly.

3) Another way of saying this is that we have embraced truth-telling with new vigor. The U.S. military has a policy about lesbians and gays called “Don’t ask, don’t tell.” This is an insidious policy that does not work, and only encourages dishonesty and division. In many ways, it is also the policy of much of the Christian Church. The only way to exist as an LGBT person in most of the church is to hide one’s sexuality in a web of shame and secrets. This hiding is rewarded, while those who tell the truth are punished. It is a sick, broken system that prevails at the highest levels of the church. It is alien to the Holy Spirit and to Jesus Christ, who said, “You shall know the truth and the truth shall set you free.”

4) We offer laughter and humor. One of the ways LGBT people have historically coped with our oppression and suffering, is to find humor and to give the gift of laughter. One of my favorite stories during the years of AIDS activism in the U.S., when the LGBT community in particular were protesting the government’s inaction about AIDS, taking it to the streets. As the federal marshals were preparing to arrest us, we noticed they were wearing large, yellow rubber gloves (in ignorant fear of contracting AIDS through casual contact). Protesters shouted out “Your gloves don’t match your shoes! Your gloves don’t match your shoes!” It was hard even for the federal marshals not to laugh. Laughing at the ridiculousness of AIDS-phobia and homophobia has often given us a sense of our own common humanity and freedom in the midst of our struggles.

5) There are millions of gifted, talented, LGBT people all over the world, in the church, who have so much to offer for “tikkun olam” — the repair of the world. None of us, especially not the young people among us, want to waste any more of our time debating about our sexuality. Young people in MCC, and in the wider LGBT community, are committed to living and modeling “the holy integration of sexuality and spirituality.” We want to offer our minds, hearts, bodies and spirits to the unfinished work of the realm of God here on earth. We want to help “make poverty history,” and offer our voices and hearts and souls to the work of peace and justice-making for all people. We don’t want to be ghettoized, or hidden in closets, or fragmented any longer. Just as Jesus invites us to the table, just as we are, we challenge all churches to follow his example.

We come to this “holy ground” of meeting at the Ninth Assembly of the World Council of Churches, filled with hope and love. We expect to make many new friends, to have moments of encouragement as well as discouragement. We expect to leave here with a new level of commitment to the common ecumenical movement, and with a deeper sense of our unfinished mission. May the Grace of God, shown so powerfully in Jesus, and manifested in the Holy Spirit, inspire us all as we go forth. 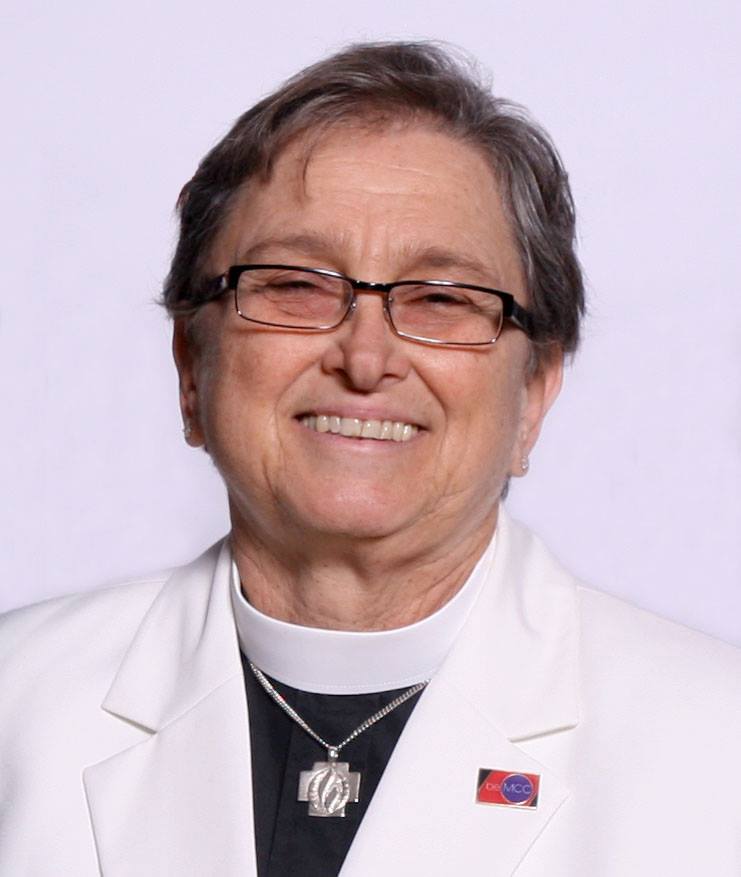 Former Moderator (global leader) of Metropolitan Community Churches (MCC), Rev. Elder Dr. Nancy Wilson was elected to that position in 2005, following the retirement of the founder of MCC, Rev. Elder Troy Perry. She earned a B.A. from Allegheny College, an M.Div. from SS. Cyril and Methodius Seminary, and a D.Min. from Episcopal Divinity School (EDS). She received an honorary Doctor of Divinity degree from EDS in 2016.

In 2011, President Barack Obama appointed Rev. Wilson to the President’s Advisory Council on Faith-Based and Neighborhood Partnerships. Their work culminated in a report of recommendations to the President: “Building Partnerships to Eradicate Modern-Day Slavery.” Following President Obama’s re-election in 2013, Rev. Wilson gave a Scripture reading at the Inaugural Prayer Service at the National Cathedral in Washington, D.C., and was the first openly gay clergy member to participate.

Her published works include: “Trust is a Queer Thing,” in Stars Shine Upon the Road of Hope (繁星照耀希望路); “A Queer Theology of Sexuality,” in On the Way of Acceptance: Christianity and Queer Community; Outing the Bible: Queer Folks, God, Jesus, and the Christian Scriptures; Outing the Church: 40 Years in the Queer Christian Movement; Nossa Tribo: Gays, Deus, Jesus e a Bíblia; Our Tribe: Queer Folks, God, Jesus and the Bible; and with Fr. Malcolm Boyd, Amazing Grace. Her prayers and poems are included in Race and Prayer, edited by Malcolm Boyd and Chester Talton. Her most recent publication is I Love to Tell The Story, 100+ Stories of Justice, Inclusion and Hope.