“I can not do this,” I thought to myself as I began my inaugural ascent out of the basement of The Bistro, the premier gay bar in Bloomington, Ill. My right hand traced up the railing, and my left hand clenched tightly around a nine-inch rainbow rhinestone cross. The club’s music grew louder, and the cheering grew clearer.

At the top of the stairs stood my best friend, my saving grace, the first person to believe in my art, the incredible woman who (thankfully) refused to let me back out of this performance at the last minute. We locked eyes and she rather matter of factly stated, “You’re ready.”

I took a deep breath and listened as Sharon ShareAlike, the hostess and emcee of the night, announced to the crowd: “Y’all better put your hands together and make some noise! For the first time on the Bistro stage, please welcome our Lady from Church, Ms. Penny Cost!”

My debut in drag was far from the Ballroom Eleganza Extravaganza I had hoped for; and yet, it was nonetheless an undeniably life changing moment of liberation and grace. As soon as my stilettos touched the stage, a feeling of peace and power fell over my entire being.

“This is exactly who I am meant to be,” I thought.

For the next two minutes and 57 seconds I paraded through the crowd, dancing and lip-synching to “You Can’t Pray the Gay Away” by Laura Bell Bundy. My “dancing” was reminiscent of the awkward gyrations of a grandmother humorously attempting to show her grandchildren just how hip she used to be. The crowd erupted in praise and in laughter. Several individuals who had stood more reserved and quieter in the background mouthed two words as they handed their crumpled dollar bills to me: “Thank you…”

The song concluded. I gathered the last of my tips. I made my exit.

As I descended the stairway, I sent up a small prayer to the Divine, thanking them for the opportunity to see myself, to feel the Holy Spirit, and to experience the peaceful assurance of Heavenly Love.

How was it that I was able to connect so powerfully with the Divine through this art? How was it that something so inherently Queer and so historically Unholy, could hold such seraphic zeal? How was it that random strangers could be moved by the comedic reclamation of church and God?

A thousand questions of theology and faith whirled and twirled through my head. One thing was clear, there was something here. Something intrinsically powerful and intensely Holy.

Unsurprisingly enough, I was not the first person to pose this arrangement of questions. In fact, in the early 1930s, a Russian literary theorist by the name of Mikhail Bakhtin composed a philosophical work titled “Rabelais and His World” which, I believe, holds insight into why and how the Art of Drag holds such power within Queer spaces. In his work, Bakhtin examines the poignancy of earthly humor and grotesque realism (a form of raw power redistribution through the deliberate comedic inversion of societies’ prevailing systems) within the carnivalesque French Renaissance.

Laughter has a deep philosophical meaning, it is one of the essential forms of the truth concerning the world as a whole, concerning history and [humanity]… Therefore, laughter is just as admissible in great literature, posing universal problems, as seriousness. Certain essential aspects of the world are accessible only through laughter.

This is to say, that sometimes at points of oppression and hardship, the only thing a person can think to do is laugh. In order to better understand, accept and begin to change an upside-down world, marginalized people must first flip it on its head: Invert the oppressive regime, point to its spears of domination, and chuckle. Only then, in a state of obnoxious irony, can a culture fully realize and approach the once-overwhelming systemic harm perpetuated against itself, all the while presenting the truth of the situation in a now more palatable form.

The comedic Art of Drag is but one route on which individuals in the Queer community can begin to engage both the Carnivalesque and the Grotesque of life. It is not a solution to oppression. It is a starting point at which we may each begin to reclaim the power of love and of life for ourselves.

As the comedian and social advocate, Hannah Gadsby, states in her 2018 Netflix special “Nanette”:

Laughter is not our medicine; stories hold our cure. Laughter is just the honey that sweetens the bitter medicine. Because, like it or not, your story is my story, and my story is your story… That is the focus of the story we need: Connection.

Due to the historic oppression and exclusion of Queer people by the “capital C” Church, LGBTQIA+ individuals hold a nearly inherent holy trauma. For some, this trauma has been more prevalent and pervasive than others — and yet it affects us all nonetheless.

This point of connection through holy trauma is the reason that I crafted my Drag Persona around the stereotypes of a 1960s “church lady.” For many Queer individuals within my own generation and the generation that came before me, this holier-than-thou, bless-your-hearting, casserole-making, passive-aggressively pleasant woman stands as a conglomerated manifestation of the powers of the Church within our childhoods. Ms. Penny Cost is the comedic epitome of that which once caused harm, while simultaneously seeking to liberate the power of faith from its historically exclusionary state.

She is the grotesque truth of a midwestern Christian experience.

She is also the carnivalesque joy of a liberated history and a reclaimed institution.

Ms. Penny Cost is my own comedic starting point: A death drop of honey in a bitter medicine.

I do wish to note that I identify as a cis-queer man. Though the Art of Drag is largely dominated in the mainstream media by cis-men, anyone and everyone can partake in the incredible art form.

Being a Drag Artist does not equate to identifying as a transgender individual; however, these two identities are also not mutually exclusive either. The beauty of Drag is that it lives, and it breathes. Drag means something different to every single individual who performs and partakes in it. No singular identity or sexuality holds its trademark.

Drag, like the carnival experience in the French Renaissance is, as Bakhtin writes:

Not a spectacle seen by the people… Everyone participates because its very idea embraces all people. While carnival lasts, there is no other life outside it… It is a special condition of the entire world, of the world’s revival and renewal, in which all take part.

All can partake in the joys and revolution and deconstruction and renewal found at the heart of drag. I use my art specifically, to open the door to a new inclusive and justice-centered faith, welcome to all people regardless of identity and sexuality.

It is not everyone’s starting point, but it is for some.

It is a point on the road to healing within the hearts of many Queer people.

It may also be a point on the road to awakening within some of the hearts of church and societal officials. Hearts that were once rooted in a previously unmovable position of harm and oppression.

Drag is a joyous revolution.

It is a grotesquely carnival experience: One dip, one twist, and one drop at a time. 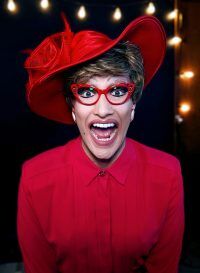 Ms. Penny Cost (She/Her/Hers) is not your average church-lady! She (as her real life counterpart Isaac Simmons) is the first Drag Queen in the world to become a Certified Candidate for Ordained Ministry within the United Methodist Church. As an unapologetically Queer Drag Queen, her eye-catching ministry has earned her the title of “The Drag Evangelist” due to her ability to reach, empower and celebrate LGBTQIA+ People. She has preached to congregations from Alabama to California and has been featured by NPR, Sojourners Magazine and Religion News Service. Her drag is rooted in a unique reclamation and reconstruction of faith which aims to show all people as whole-ly and holy made!