A Pastoral Letter from Cleveland

Grace to you and peace.

I did not plan to join the protesters. Most certainly, neither Diane nor I intended to be jailed in Cleveland during the General Conference. But the Holy Spirit moved us and here I am in the Cleveland jail for the second day in a row.

You are probably asking the same question I have asked myself; namely: Why?

While I do not pretend to understand fully my response to the Spirit’s nudging, the following insights are emerging in my soul. I offer them as confession, not as argument.

I am where I am because I could not in Christian conscience be elsewhere.

Outcome of votes no surprise

Rather, I experienced the protests (the SoulForce ecumenical witness on May 10 and the United Methodist witness on May 11) as expressions of pain so deep in the souls of those once again excluded by the church that words could not express their anguish. They decided to enact what mere utterances could not convey.

Thus, I decided that it was essential that a Bishop needed to be present with those who were hurting terribly. Their pain demanded response from a person or persons in authority. I had and I have no question where Jesus or Martin Luther King or John Wesley or Dorothy Day or Caesar Chavez or Sojourner Truth or other saints would have been on May 10 and 11. I went where Jesus could be found, and I have seen the Risen Christ in the faces of jailed protesters, the wonderfully supportive police — especially the officers of color — and in the words and hospitality of the judge before whom I stood.

During my personal devotions at General Conference, I returned again and again to Luke: Chapter 15. As a result, I have come to perceive that the one sheep outside the fold just might have been driven out by the 99 others. Perhaps he/she was different, like a chicken without sufficient pin feathers, who is picked on unmercifully by the rest of the chickens. And, Jesus makes it absolutely clear in Luke Chapter 15 where his followers need to be: namely, with the marginalized one outside in order to bring that isolated and wounded one home.

I am in jail with the picked on and driven out as a pastoral act of empathetic solidarity. I long for the isolated outsider to be welcomed home by the 99 insiders, and until that occurs, I know where Jesus calls me to be, at least some of the time.

For me, being here is part of a seamless garment. It occurs within a 40-year pastoral-prophetic fabric of

Standing in the name of Jesus with the excluded, hurting and marginalized has been the essence of my ministry from its beginning. Being here in the Cleveland jail is not the result of a newly discovered commitment. Rather, it is part of an old, old story, which was well-known when I was elected and consecrated a Bishop. I have long been called to stand with and for those on the outside longing to be inside. I am here because I could do no other and remain faithful to my calling.

I must say candidly and unequivocally from my pastor’s heart and scholar’s head that I find the Church’s appeal to scripture on the issues surrounding homosexuality sorely lacking. Any thinking Christian knows that literal interpretation of several passages in the Bible caused or permitted the Church to support slavery, denigrate women and harass divorced Christians for longer than we care to admit. We are doing the same thing again on this issue by isolating a few less-than-unequivocal passages, ripping them from the total biblical corpus, interpreting them one-sidedly and then treating gay and lesbian Christians as less than disciples of Jesus regardless of the content of their character, the fidelity of their relationships or the depth of their commitment to their Savior.

I find this scholarship to be faulty at best and the conclusions drawn heartbreaking because they are as murderous of gay and lesbian Christians as prior mistaken interpretations were to people of color, women and divorced Christians, including many pastors and some Bishops. Not surprisingly, most of the voices in the past against people of color, women and divorced Christians and now against homosexuals in this culture in the United Methodist Church are the voices of Anglo males. Sometime their anger and rhetoric appear to be more a game of power than an exercise of ministry. I, for one, refuse to play that evil game.

I was profoundly disappointed that the Council of Bishops did not choose to address this issue during this quadrennium and then speak clearly to the Church of our own many differences and composite pain. I cannot fathom a leadership group refusing to face head on, not the most important, but, the most vexing issue before the Church today. My soul aches in remembrance of our sin of omission.

Despite my love and abiding respect for individual Bishops, I confess that sometimes I feel like a motherless child in the Council of Bishops, which is my Church home. But I did inform the Council of Bishops of what I intended to do May 10 and 11, short of being arrested, which I had not planned. And, to a person, the Bishops supported my decision, applauded my candor, even if most appeared to disagree with my conclusions and intended actions.

They are my brothers and sisters and I affirm them as family even as I remain disappointed with what feels to me like extreme reluctance to grapple openly and candidly with the very matters that our positions of leadership demand we face, however painfully and vulnerably.

Abide by all the decisions

So, here I am in jail. But I shall return home soon. God and the municipal court judge willing. And, when I do, I intend to abide by all the decisions made by the General Conference. The Church has spoken. I personally affirm everything we did except our statements regarding gay and lesbian Christians. But, I shall uphold 100% of that which was enacted, as my affirmation of the covenantal nature of our connection. I ask all of you to do the same.

We are United Methodists

We are United Methodists. As one, I have made my witness. Nevertheless, I am proud of our heritage, while sad about our treatment of gay and lesbian Christians. I am convinced that in the long run God’s arm will bend toward merciful justice, and the outsider will one day be welcomed home. Until then, when I get out of here (Editor’s note: Bishop Sprague was released with a verbal commendation from the judge), I intend to keep on keeping on by honoring my vows to uphold the Book of Discipline and order of the Church, while providing a pastoral presence and a prophetic voice for the anaweim: the hurt and broken ones of the earth, including gay and lesbian Christians, their families and friends.

Perhaps, dear readers, allies and adversaries alike, the question is not why I am in jail but why more of us are not constantly present where the hurts are greatest, the pain most intense and the Risen Christ majestically present.

Believe me, I have seen Jesus here in the Cleveland jail. And I am grateful that when I leave, I shall emerge sadder but more peaceful, contemplative but more committed, disappointed but more hopeful because I have seen the Risen Christ and I am not nor shall I ever be the same again.

Your brother in Christ, 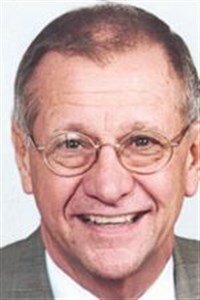 Assigned as Bishop of the Chicago Episcopal Area and the Northern Illinois Conference in 1996, Bishop Charles Joseph Sprague retired in 2004 having served in the episcopacy after 27 years as a pastor and seven years as an ecumenical officer. He earned a bachelor’s degree from Ashland College and a master’s of divinity from the Methodist Theological School in Ohio and is the recipient of honorary doctoral degrees from Kendall College, Ohio Wesleyan University and the Chicago Theological Seminary. He is the recipient of the AFSC Courage of Conviction Award, the Rainbow Push Civil Rights/Peace Award, and the William Sloane Coffin Award for Justice and Peace. The author of Affirmations of a Dissenter and co-author of a chapter in the seminary textbook Pastor As Educator, he has served as adjunct faculty at both Ohio United Methodist seminaries.