Even when English translations of the Bible specifically use the word “homosexual” or “homosexuality,” it most often reflects a philosophical and theological bias on the part of the translator, and the sponsoring organization or agency which publishes that translation.

Because he is frequently the victim of such biased translation, Paul is often unfairly maligned and underappreciated by LGBT Christians. He was the author of the oldest Christian documents known to scholars — his New Testament letters to the new communities of faith at Rome, Corinth, Galatia, Ephesus, Philippi, Colossus, Thessalonica, and to three individuals — Timothy, Titus and Philemon.

Corinth in Paul’s time was a Greek city under Roman occupation, a cosmopolitan crossroads of the ancient world where so many different cultures and nationalities rubbed shoulders that Greek was the accepted common tongue, as English is today in most parts of the world. This was true throughout most of the civilized world in Paul’s time, the first century of the Christian Era, and Paul’s new churches were usually planted in such sophisticated urban locations.

Paul was a non-Palestinian Jew, and through extensive education and training became a Pharisee (especially observant and influential Jews — the name itself means “separate ones” in Hebrew), but he was thoroughly immersed in the Greek civilization of his birthplace, Tarsus in Asia Minor, modern-day Turkey. Paul was a native speaker of eloquent Greek. Some of his passages are among the most poetic and beautiful in all the Bible.

The Greek words Paul uses in 1 Cor. 6:9 (and 1 Timothy 1:10) are malakos and arsenokoitai. The King James monarchial, patriarchal translation of nearly 400 years ago (1611) — addressed to men, and not much concerned with women except as property and in keeping them in their rightful place — rendered these “effeminate” and “abusers of themselves with mankind.”

The Revised Standard Version (1952) combined the two words into one translation, “homosexuals,” a terminology and concept — of biological sexual attraction to the same gender — that did not even exist in English or any European language until the mid-19th century. The New RSV (1989) translated them separately again, as “male prostitutes” and “sodomites.”

The New International Version (1978) translated them “male prostitutes” and “homosexual offenders,” recognizing what some scholars believe may have been closer to Paul’s intent, to identify specific forms of same-sex practice that were regarded as deplorable. It seems that how these words are translated often has more to do with preconceptions and convictions of the translators than the sense of the original Greek language.

Malakos (literally “soft”) was not commonly used by Greek speakers of Paul’s time in sexual contexts (nor is it today). In Paul’s usage, it may be suggestive of some kind of effeminacy or weakness, but it is not a word which other speakers and writers of Greek used to refer to homosexual behavior or practitioners. Malakos, indeed, is used in several other places in the New Testament in ways that have nothing to do with sex (e.g., Matt. 11:8 and Luke 7:25). The word’s usage overall is uncommon.

When malakos or similar words are used by other Greek speakers and writers, they are never unambiguous references to sex between males. There were plenty of other words in ancient Greek language — erastes, eromenos, paedika, paederastes and others — which Paul would have had at his command. If Paul intended unequivocally to condemn all manner of sex between males, it is extremely puzzling that he didn’t use words which his Greek-speaking audience would find familiar and unambiguous.

Oddest of all, arsenokoitai is a coinage attributed to Paul, having been found by scholars nowhere else in any pre-Pauline Greek writing, and being found after Paul only in discussions of and attempts to decipher his usage.

Paul seems most specific and unambiguous in Romans 1:26-27, but this passage is by no means as clear a denunciation of modern same-gender sexual expression as those who cite it would like to present. If these two verses are read in context from verse 18 forward, what seems evident is that here, once again, the subject is persons who worship other gods.

“They exchanged the glory of the immortal God for images resembling a mortal human being or birds or four-footed animals or reptiles.” (Romans 1:23) It is these idolaters whom God gave up to unnatural passions (i.e., that are contrary to one’s nature, as same-sex behavior would be for a heterosexual), and whom Paul condemns.

Finally, it is wise to read Paul in the context of his own admonition in 1 Corinthians, that what he prescribes for the seedling churches whom he addresses is not necessarily mandated by God, but sometimes merely Paul’s own opinion. Paul, you see, did not know he was writing “Scripture” (and nothing else in the New Testament yet existed), but only letters of comment and advice to friends in the faith, much as each of us might do.

Paul says, “… I have no command of the Lord, but I give my opinion as one who by the Lord’s mercy is trustworthy.” So do we all. 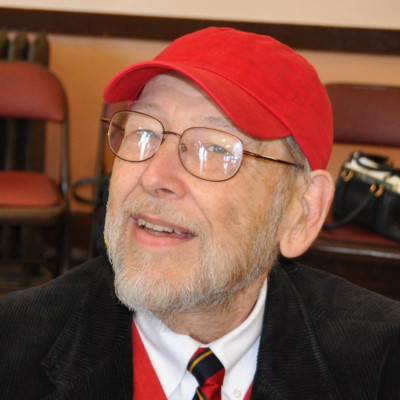 Illinois native Lawrence A. Reh started his career as a journalist, serving for two years as news editor of The Advocate in Los Angeles before going into community service and activism and eventually into ministry. He earned a bachelors in psychology and political science from Bradley University and an M.Div. from San Francisco Theological Seminary, where he organized a cross-denominational full-semester class for credit through the Berkeley-centered Graduate Theological Union titled “Lesbian and Gay in Church and Society.” Active in Presbyterians for Lesbian and Gay Concerns, That All May Freely Serve, and More Light Presbyterians, in 1999 he founded First Light Ministries, an online outreach to excluded and disaffected LGBT spiritual seekers. He has also published a volume of his poetry, If I Could Crown Your Hills with Gold.