Some years ago, I tried a breathing meditation. The idea was to spend some time simply watching my own breath. Not breathing any special way, not trying to achieve anything but stillness. “If random thoughts emerge,” my teachers told me, “simply let them go.”

Simply let them go. So simple, right? Not if you live in my brain. Letting my thoughts go got to be quite the production – like gathering a nest of reluctant squirrels into a pick-up truck load of Have-a-Heart traps, driving out into the country, and trying to shake those suckers loose. My head would fill with scurrying and scampering, that chk-chk-chk of squirrelly displeasure, tiny furred hands clinging to wire mesh…anything but stillness.

Fifteen minutes of attempted meditation, and I’d be exhausted by exertions with my feral thoughts. It was years before I came across the wise and gentle language change: don’t let all those thoughts just go – just let them be. Whispered words of wisdom, indeed.

When it comes to matters spiritual, I struggle to take a hands-off approach. Give me the slightest opening, and I’ll dive into still waters with hands and feet splashing, and drown out any still small voice in the vicinity.

And so it’s been with this invitation to shine.

“You are the light of the world,” Jesus says, and I get right to work. What part of me shines brightest? I begin to wonder. Where’s my lamp-stand, how best do I climb up? In milliseconds, I can turn Christ’s invitation into my own ambition, and begin to imagine that, when he speaks to me, Christ refers to publications and awards, recognition, recompense.

I don’t imagine that outright, mind you – but these ideas hover just beneath the surface when I focus only on one aspect of my life and try to wire it to the neon brightness of success. I’ve seen others do something similar with sacrifice – disdaining other aspects of their lives for those activities they deem their most-or only-holy offerings.

But Jesus is pretty unmistakable, despite our strongest efforts. “YOU,” he says – not “part of you,” not “your best works,” but “YOU.” “ARE,” he says. He doesn’t say, “could be,” “might be,” or “just might have a chance, with hard work and a little luck.”

But how, exactly, do we do this? These days, I’ve been taking some cues from what I know of light.

First: light reaches out toward darkness. Jesus’ statement about lights and the world comes at the end of the Sermon on the Mount, in which he, one by one, picked out some darker spots in which we often find ourselves: poor in spirit, lowly, persecuted. He held each one aloft, and showed its shine. In the same way, I think the call to us is for us each to find, and then embrace, our tarnished, nicked-up parts – those aspects of ourselves we’d just as soon ignore.

Second: lamps aren’t really focused on their shining. In Jesus’ time, lamps burned oil; now most lights are all about shuttling electrons back and forth. The shining, in both cases, is a side effect. For me, there are two pieces to this lesson – the easiest is to trust that shining is a side effect, and to get on with it. The second piece of this lamp-wisdom is about the burning, and is a little trickier for me.

Lamps use up their fuel. This isn’t about wastefulness, but it is about consumption. Jesus calls us to new life, but he doesn’t scorn the present one. Too often, I have participated in a kind of disregard for life – a looking past the present moment toward the better future. Nothing gets me busheled up more quickly – in my eagerness to do more, to get better, the shine brighter, to improve, I dampen down my presence, trade any light that I might have for heat, and begin to parse and judge just where and how my shining will be spent.

Jesus, I believe, calls us to stop judging ourselves, to resist the parceling of good from bad, the controlled release or conservation of our shine. Jesus lays the reassuring judgment down: we are, already and entirely, lights of the world. Get on with it-and burn!

And finally, when I think about how best to be a shining lamp, I remember that light can be multiplied with mirrors. Other people-friends and family, even strangers – have identified my light for me. And this has often caught me by surprise. The unconsidered word, the unplanned gesture, the bend to circumstance…often, these have been more meaningful to others-more filled with light-than all my practiced offerings: 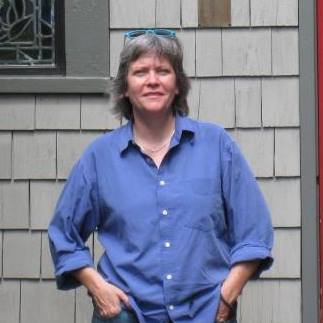