I first met the woman who would become my partner as a freshman in college. She was a sophomore and lived just down the hall in the same women-only dorm. I had several high school classmates that I spent time with while Jen hung out with a group of juniors and seniors. We would say hello, if we bumped into one another between classes but that was the extent of our contact for my first two years of college.

My junior year found most of my buddies drifting away. Many of Jen’s friends had graduated and moved on. We ended up in a class together and became study partners. For six months, one and a half semesters, we learned about each other, our values, habits, and goals. Six months of trying to pretend there wasn ‘t a mutual attraction, while rooming together was impossible. We finally had a long talk, late one night. The next day, we went to a store and bought a couple of matching rings. They weren ‘t expensive but that didn ‘t matter. What mattered were the promises we made and the marriage we started that day.

None of our friends could understand why we spent so much time together and our silence made them uncomfortable. The dorm grapevine had a feeding frenzy on the rings and possible significance. We hotly denied any insinuations or outright queries regarding our sexual orientation. Classic cases of “the lady doth protest too much”. The more we denied, the more certain everyone was.

That summer, we left the residence hall system and rented an apartment together. My family, living in the same city, learned of the rumors surrounding our relationship. Prior to renting the apartment, Jen and I had often attended family birthday parties and cookouts together and my relatives seemed to like and enjoy Jen’s company. She was friendly, with a good sense of humor and a willingness to play with my nieces and nephews. Once we rented a place, I was no longer allowed to visit my nieces and nephews without “adult supervision” and Jen was not welcome at family gatherings. In retaliation, I wrote my relatives an angry, vicious coming out letter. I informed them that they could not call me and that I was leaving my Christian upbringing to become Wiccan.

I was raised in a conservative family, a family that left a very nice congregation because they called a female pastor. My parents frowned on interracial marriages and I was often warned that I ‘d be disowned if I dated any of the Latino boys in my school. I began attending a different church than my family when the pastor stood in the pulpit and told the congregation who to vote for in the upcoming election.

Jen’s family had mixed ties to religion. Her maternal grandmother was a Jehovah’s Witness. Her father ‘s parents were very active in the Presbyterian Church. Her grandfather, an accountant, handled the finances for the congregation and sang in the choir. Her grandmother was very active in Sunday school classes and the women’s prayer groups. Jen’s parents only attended church on Easter and Christmas. Jen didn ‘t have many strong views and even marked on her college application “no religious preference” until her mother had a fit and demanded she fill in “Presbyterian”.

Wicca appealed to us as a couple. Jen was put off of Christianity by the actions and words of my family, as well as those by Pat Buchanan and Pat Robertson. I was determined to find a faith that could accept me as a lesbian and a thinking person. Too much of my upbringing had been blindly accepting what I was told and questioning a pastor ‘s sermons or voicing my own opinions of the Bible study lessons was wrong. Wicca not only accepted us as a couple, it encouraged us to think about the values and ideals we had been raised to believe. The Wiccans we met were willing to accept us as a couple and welcomed our questions. We were encouraged in the studying the faiths of various peoples and times. Our goal was to find a blend of beliefs that met our needs and guided our path.

We lasted in Wicca about six months. Ultimately, I did not find a faith I could embrace. The more I learned, the less I could accept any one religion as “correct”. The loss of a “true path” hurt me deeply and made me a bit cynical and doubting. Jen tried to believe but, in her heart, she just couldn ‘t find anything to guide her and touch her soul. We decided to live without a personal faith and walked away from Wicca. I soon contacted my family and began rebuilding my relationship with them. Shortly after that, Jen and I left Arizona for her home and family in Washington State.

My mother often urges me find a church home. I just can ‘t bring myself to do so. I can’t believe the things I was taught as a child but I ‘m not comfortable with the more “liberal” theology found in gay-friendly congregations. Jen is even less inclined to Christianity, as we watch our dreams of marriage being shattered by the “Religious Right”. I ‘d like her to attend church with me but I know she is uncomfortable with the idea. I won’t force it on her because that would do more harm than good.

My mom is now cordial to Jen but she doesn’t accept our relationship and she doesn’t feel our seven years together is a reason to celebrate. Mom often sends me daily devotional works and encourages me to read my Bible. Jen ‘s parents haven’t mentioned any religious views to either of us. Jen’s mother and I get along very well but I don’t truly know if she accepts our life together. Jen’s father tries to be polite but our relationship is a struggle for him. I often wonder who in our families would attend, if Jen and I ever hold the commitment ceremony we want. Between the cost and the uncertainty, I doubt we will ever wed in a church, although we both would like to. Without the ceremony, I don’t think we’ll have a family together. We would want our children to have a sense of security and permanence. Without a church and supportive relatives, I don ‘t think raising a family is wise.

I began this intending to discuss why I left my Christian faith for Wicca and what brought me back to Christ. Looking back on it, I’m not certain my heart is His. I recently read Rainbow Family Values by Rev. Michael Piazza. He discusses founding a relationship on Christ. Jen and I haven’t been able to do that. I hope that will change for us in the future. If it doesn’t, then I hope it will happen for the young couples that follow us. 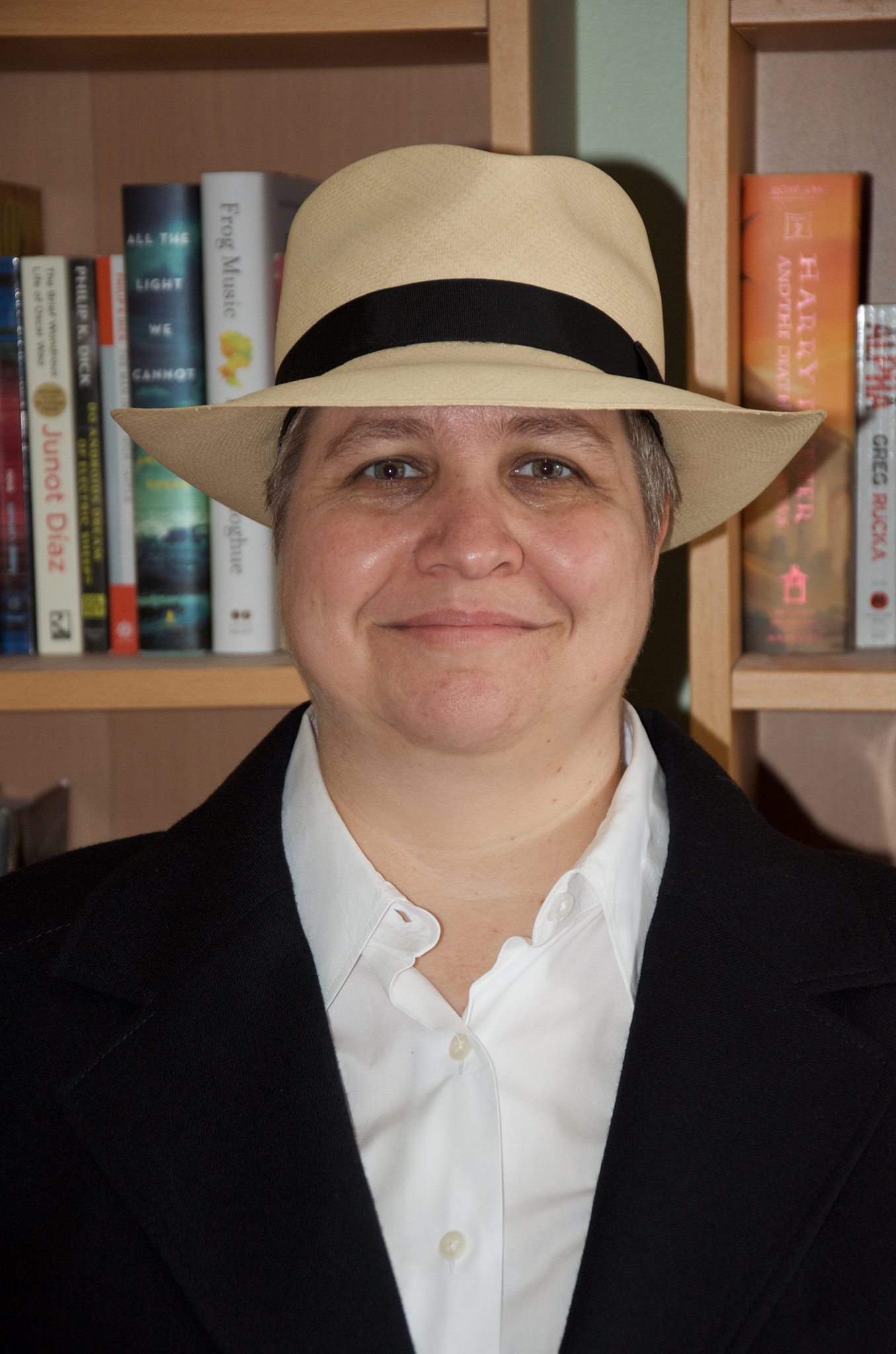 Originally from a small town in southern Arizona, Ruth F. Simon relocated to Seattle, where she met her wife Jennifer. They transplanted to Brooklyn in 2006 so Ruth could study medieval British literature at New York University, and in 2016 they relocated to northern New Jersey. A fountain pen and hat fanatic, Ruth is a member of the Sisters in Crime, the National Writers Union, PEN America, and the Authors Guild and a graduate of the first-ever Golden Crown Literary Society Writing Academy program.