The Bible Is an Empty Closet

“The issues about Homosexuality are very complex and are not understood by most members of the Christian Church,” according to Bernard Ramm of The American Baptist Seminary of the West. This evangelical authority on biblical interpretation says that, “To them, it is a vile form of sexual perversion condemned in both the Old and New Testaments.” But as Calvin Theological Seminary Old Testament scholar Marten H. Woudstra says: “There is nothing in the Old Testament that corresponds to Homosexuality as we understand it today” and as SMU New Testament scholar Victor Paul Fumish says: “There is no text on homosexual orientation in the Bible.” Says Robin Scroggs of Union Seminary: “Biblical judgments against Homosexuality are not relevant to today’s debate. They should no longer be used . . . not because the Bible is not authoritative, but simply because it does not address the issues involved. . . . No single New Testament author considers [Homosexuality] important enough to write his own sentence about it.” Evangelical theologian Helmut Thielicke states: “Homosexuality . . . can be discussed at all only in the framework of that freedom which is given to us by the insight that even the New Testament does not provide us with an evident, normative dictum with regard to this question. Even the kind of question which we have arrived at . . . must for purely historical reasons be alien to the New Testament.”

Ideas and understandings of sexuality have changed greatly over the centuries. People in biblical times did not share our knowledge of customs of sexuality; we do not share their experience. In those days there was no romantic dating as we know it today; marriages were arranged by fathers. The ancients, as MIT’s David Halperin notes: “conceived of ‘sexuality’ in non-sexual terms: What was fundamental to their experience of sex was not anything we would regard as essentially sexual: rather, it was something essentially social — – namely, the modality of power relations that informed and structured the sexual act.” In the ancient world, sex was “not intrinsically relational or collaborative in character; it is, further, a deeply polarizing experience: It serves to divide, to classify, and to distribute its participants into distinct and radically dissimilar categories. Sex possesses this valence, apparently because it is conceived to center essentially on, and to define itself around, an asymmetrical gesture, that of the penetration of the body of one person by the body, and, specifically, by the phallus of another. The proper targets of [a citizen’s] sexual desire include, specifically, women, boys, foreigners, and slaves — – all of them persons who do not enjoy the same legal and political rights and privileges that he does.” In studies of sex in history, Stanford classics professor John Winkler warns against “reading contemporary concerns and politics into texts and artifacts removed from their social context.” This, of course, is a basic principle of biblical hermeneutics. In spite of all of this, some preachers continue to use certain Bible verses to clobber lesbians and gay men today. Let’s take a closer look at these texts.

“God created people in His own image. In the image of God he created them; He created male and female.”

This text celebrates God’s deliberate and equal creation of persons who are male and persons who are female. Such a sense of equal creation was not typical in the ancient world. According to Eastern Baptist Seminary professor Douglas J. Miller: “Crude natural law ideas are . . . read into . . . the early chapters of Genesis….This view [supports] the ‘physicalist’ ethical model upon which heterosexism is built….This view of creation is based upon the obvious anachronism of reading 13th century definitions of nature into ancient Hebrew texts.” Those who use Genesis 1:27 against homosexuals should note Paul’s statement in Galatians 3:28 in which he is emphatic that there is now no theological significance to the heterosexual pair “male and female.” According to evangelical Pauline scholar F. F. Bruce: “Paul states the basic principle here; if restrictions on it are found elsewhere . . . they are to be understood in relation to Galatians 3:28, and not vice versa.”

The story of Sodom and Lot’s duty of hospitality to his guests.

According to evangelical Bible scholar William Brownlee: “‘sodomy’ (so-called) in Genesis is basically oppression of the weak and helpless; and the oppression of the stranger is the basic element of Genesis 19:1-9.” Yale’s John Boswell notes that “Sodom is used as a symbol of evil in dozens of places [in the Bible] but not in a single instance is the sin of the Sodomites specified as Homo- sexuality.” Listen to the prophet Ezekiel (16:48-49) on the sin of Sodom: “As I live, says the Lord God, . . . This was the sin of your sister city of Sodom: she and her suburbs had pride, excess of food, and prosperous ease, but did not help or encourage the poor and needy. They were arrogant and this was abominable in my eyes.” (Cf. Matthew 10:15) The men of Sodom tried to dominate the strangers at Lot’s house by subjecting them to sexual abuse. Such attempted gang-rape is about humiliation and violence, not same-sex affection.

“You shall not lie with men as with woman: it is abomination.”

“Abomination” (TO’EBAH) is a technical cultic term for what is ritually unclean, such as mixed cloth, pork, and intercourse with menstruating women. It’s not about a moral or ethical issue. This Holiness Code (chapters 17 – 26) proscribes men “lying the lyings of women.” Such mixing of sex roles was thought to be polluting. But both Jesus and Paul rejected all such ritual distinctions (cf. Mark 7:17-23; Romans 14:14,20). The Fundamentalist Journal admits that this Code condemns “idolatrous practices” and “ceremonial uncleaness” and concludes: “We are not bound by these commands today.”

These terms, KEDESHA and KADESH, literally mean “holy” or “sacred.” There is no Hebrew derivative of the word “Sodom” in this passage; the King James Bible supplied it erroneously. The Hebrew words here are references to the “holy” female and eunuch priest-prostitutes of the Canaanite fertility cults, of which Israel was to have no part. Moreover, Louisville Presbyterian Seminary Bible scholar George R. Edwards notes that “No prophet uses the noun for male cult prostitute or discusses the activity such a person pursued. The prophets, in fact, are as silent on the subject of homosexual acts as is the whole tradition of the New Testament teaching of Jesus. This is,” he says, “a very significant silence.”

Pagan “women exchange natural use for unnatural and also the [pagan] men, leaving the natural use of women, lust in their desire for each other, males working shame with males, and receiving within themselves the penalty of their error.”

Furnish gives us perspective in turning to the writings of Paul. “Since Paul offered no direct teaching to his own churches on the subject of homosexual conduct,” says Furnish, “his letters certainly cannot yield any specific answers to the questions being faced in the modern church…. For Paul neither homosexual practice nor heterosexual promiscuity nor any other specific vice is identified as such with ‘sin.’ In his view the fundamental sin from which all particular evils derive is idolatry, worshiping what is created rather than the Creator, be that a wooden idol, an ideology, a religious system, or some particular moral code.”

In Romans 1, Paul is ridiculing pagan religious rebellion, saying that the pagans knew God but worshiped idols instead of God. To build his case, which he’ll turn against judgmental Jews in chapter 2 — – he refers to typical practices of the fertility cults involving sex among priestesses and between men and eunuch prostitutes such as served Aphrodite at Corinth, from where he was writing this letter to the Romans. Their self-castration rites resulted in a bodily “penalty.” Catherine Krueger comments in the Journal of the Evangelical Theological Society that “Men wore veils and long hair as signs of their dedication to the god, while women used the unveiling and shorn hair to indicate their devotion. Men masqueraded as women, and in a rare vase painting from Corinth a woman is dressed in satyr pants equipped with the male organ. Thus she dances before Dionysus, a deity who had been raised as a girl and was himself called male-female and ‘sham man.'” Krueger continues: “The sex exchange that characterized the cults of such great goddesses as Cybele [Aphrodite, Ishtar, etc.] the Syrian goddess, and Artemis of Ephesus was more grisly. Males voluntarily castrated themselves and assumed women’s garments. A relief from Rome shows a high priest of Cybele. The castrated priest wears veil, necklaces, earrings and feminine dress. He is considered to have exchanged his sexual identity and to have become a she-priest.” As such, these religious prostitutes would engage in same-sex orgies in the pagan temples all along the coasts of Paul’s missionary journeys. “Paul’s conception of Homosexuality,” as Thielicke points out, “was one which was affected by the intellectual atmosphere surrounding the struggle with Greek paganism.” Says Scroggs: “The illustrations are secondary to [Paul’s] basic theological structure” (Cf 3:22b-23, Paul’s own summary), and Furnish adds: “homosexual practice as such is not the topic under discussion.” Doesn’t what Paul says in the beginning of Romans better describe these pagan orgies he meant to ridicule than it does the mutual love and support in the domestic life of lesbian and gay male couples today?

Paul’s reference to malakoi and arsenokoitai.

Evangelical New Testament scholar Gordon D. Fee of Regent College says that these two terms are “difficult.” The Fundamentalist journal admits: “These words are difficult to translate.” Of arsenokoitai, Fee says: “This is its first appearance in preserved literature, and subsequent authors are reluctant to use it, especially when describing homosexual activity.” Scroggs explains that “Paul is thinking only about pederasty, . . . There was no other form of male Homosexuality in the Greco-Roman world which could come to mind.” Ancient sources indicate that the malakoi were “effeminate call boys.” Though Paul seems to have coined arsenokoitai, it refers, perhaps, to the call boys’ customers, although nobody knows for sure. Paul’s main point, however, is clear: Christians who slander and sue each other in pagan courts are just as shameful as robbers, drunkards, the greedy, and the malakoi and arsenokoitai (whatever they were). The other kind of pederasty in Paul’s day was that of the slave “pet boys” who were sexually exploited by adult male owners. The desired boys were prepubescent or at least without beards so that they seemed like females. These men had wives for dowries, procreation and the rearing of heirs. They had “pet boys” for sex – hardly the picture of gay relationships today. 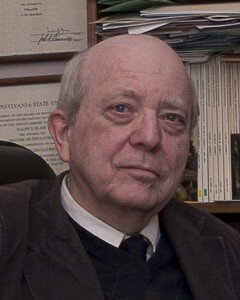 An American psychotherapist and founder of The Homosexual Community Counseling Center in New York City, Dr. Ralph Blair founded Evangelicals Concerned an American network of gay and lesbian evangelical Christians and friends, in 1975.